Getting Pooped on by a Crocodile in The Philippines

While in the Philippines I’d had every intention of only staying in Puerto Princessa for a hot second before getting on a painfully long bus ride to the enchanting land of Palawan. I never made it to Palawan.

In Puerto Princessa I was staying at the lovely Sheebang Hostel where I, of course, made friends. One of those new friends was called John. John had the idea to get in a tuk tuk and hit up two locations a reasonable distance from the city. So, naturally, I went with him.

Curious if I stay in touch with these friends I meet all over the world? Read about it!

Stop number one was a penal farm. Iwahig Prison and Penal Farm to be exact. The farm is an amazingly tranquil oasis of green fields and blue skies. Our tuk tuk drove us through the entrance where we registered and continued driving through the compound. No barbed wire fences, no watch towers, in fact, no noticeable security at all. Eery, peaceful silence. Calm, quiet stillness. 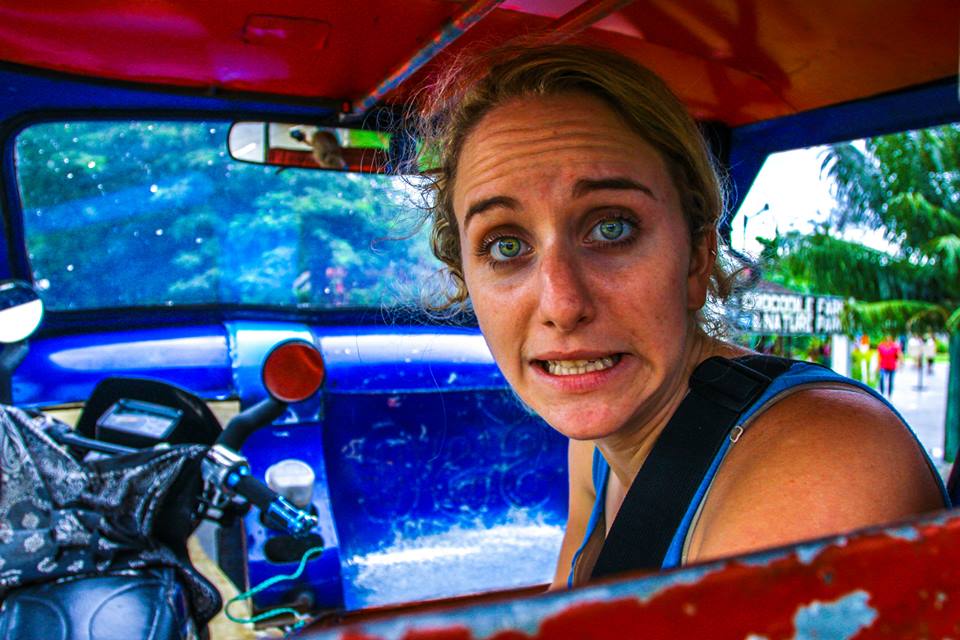 We pulled up outside of a long white town hall like building, walked up the few steps and all of sudden men began popping out of the walls. The prisoners. They wear varying colored t-shirts depending on their status as minimum, medium, or maximum security prisoners but there’s no way for us to know which is which. Still no security. Around the edge of the room were a series of tables, each table belonging to an inmate where he sold the goods he made on the farm. Little bracelets, tiny wallets, small trinkets, silly souvenirs. The money each prisoner earns from his sales to tourists like us allows him to purchase extras on the farm. And, more importantly, the skill he learns helps him prepare for life on the outside. Of course each inmate wants you to buy from him and with only two of us in the room the pressure to make a sale was high. Once John and I had each spent a few pesos something bizarre happened.

The inmates, tattooed across their arms, down their faces, buff, tan, many of them probably in for murder, fell into order and executed a perfectly choreographed routine to “I Want You Back.’ 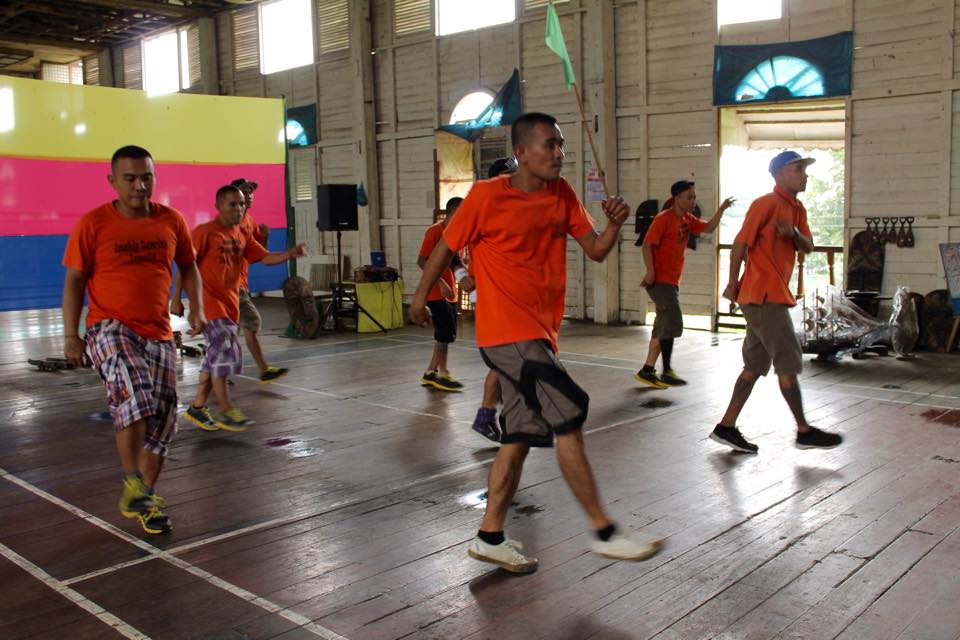 They finished. We took a group photo. A bit stunned we plodded back down the steps into our tuk tuk.

A tour starts from the entrance, through a room full of breeding crates full of tiny baby crocs under incubator lights. Up steps, a platform runs over an open enclosure with full sized, as in enormously full sized, crocs. And then at the end of the tour, the main event, the chance to hold a baby croc. 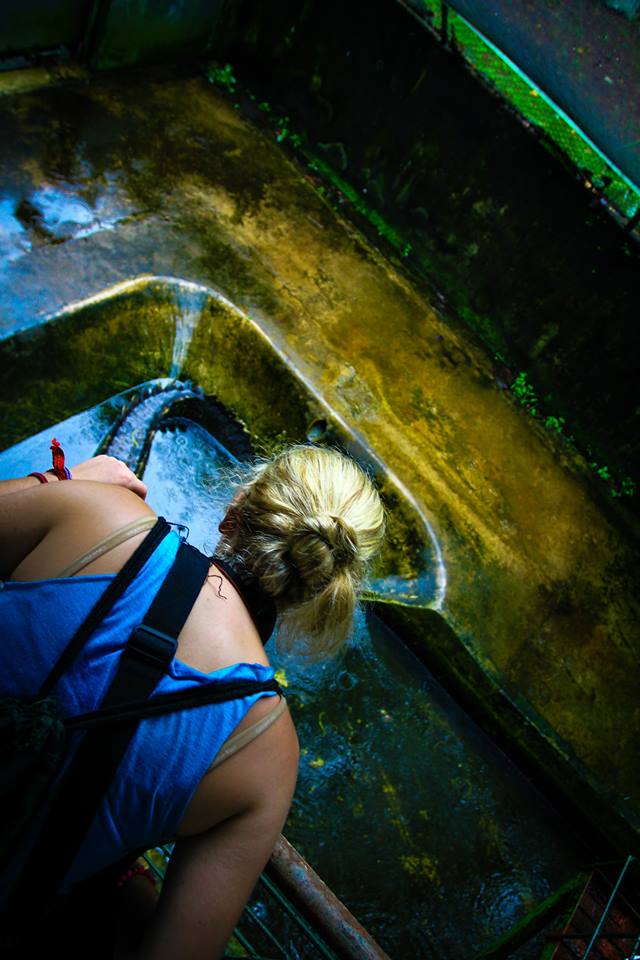 The photo’s were taken against a purple green screen and immediately edited with a fake background for a few pesos. John had a plan, if we waited until last, let all of the hoards go ahead of us, we’d have a bit more time. We could turn ever so slightly and instead of using the purple background we could shoot with our own cameras and use the beautiful, natural, lush, green, Filipino forest background that just so happened to be perfectly situated behind us.

Finally everyone else had gone. It was my turn. They handed me the croc, I held him in front of me and smiled, click. Put him over your shoulders, they encouraged. The handlers helped me wrap the little croc across the back of my neck and just as he was settling into place he began to squirm, his little crocodile paw slipped down my shirt as my shoulder turned warm and wet. The handlers quickly pulled my little buddy away to reveal a sticky white concoction dripping off my shoulder down my chest and along my blue top.

The croc had pooped on me. 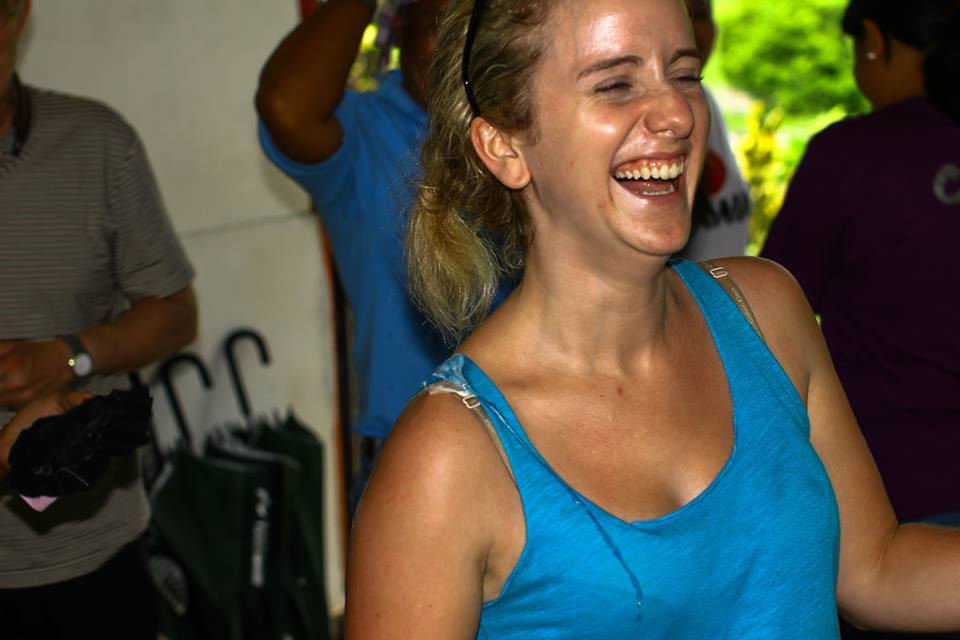 Or as I’ve learned, peed, pooped on me because for crocs, it mixes and comes from the same hole.

Shockingly, the facility was not the slightest bit ready for such an incident and had about zero means of helping me clean up. Luckily, a friendly Filipino tourist had come prepared with wet wipes. I cleaned the croc poo up and the handlers retrieved a fresh baby for me, though realistically wouldn’t it be wiser to stick with the ones who’s pipes were already cleared? 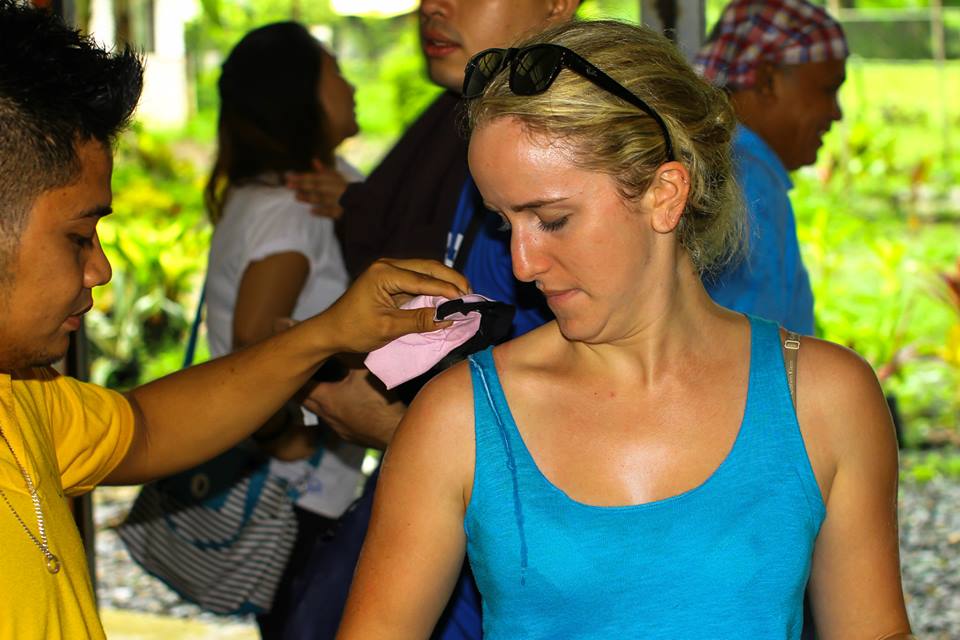 Photos taken by myself and John Watson

Edit: The photos taken here were of a young crocodile who had his mouth taped shut in order to be held by tourists. As I’m sure you can imagine, it’s unnatural first for him to have his mouth taped closed like this, and second for humans and crocs to be in such close proximity. This is an activity which today I would not participate in. However, part of becoming an animal advocate is learning about why and how to be one. And part of learning is making mistakes. I could delete this post and pretend this had never happened and I’d never participated in this, but I did. And I want you to know that we have all made mistakes on the road to being who we are. And if you road an elephant, pet a tiger, or held a crocodile before you knew that those things were wrong, you don’t need to beat yourself up, you need to learn and pass on your story of why what you did was wrong. 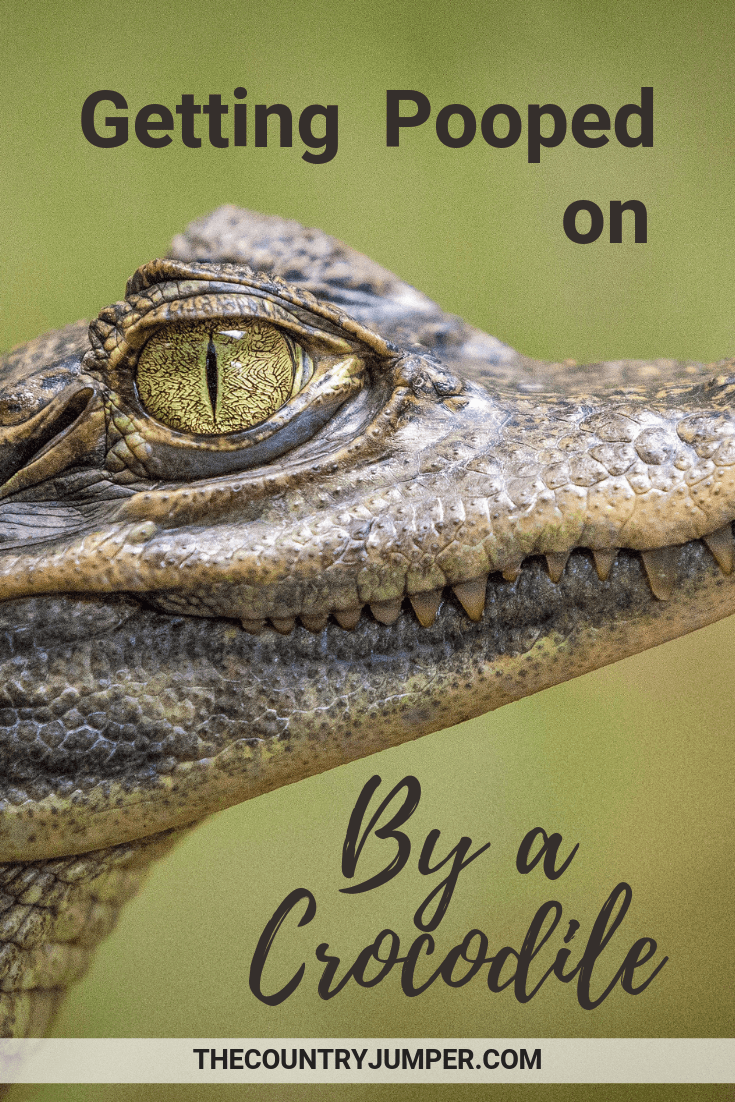 The First Week of Life in Meknes, Morocco