Most trips to Thailand will include at least one day in Bangkok, the capital of the country. Bangkok is a great city with loads to do including food, drink, temples, tours, and nightlife. You could just spend a day there, or you could fill weeks in the city. But, you could also spend weeks exploring the area around it. Perfectly located as the dividing point between the mountains in the north and the islands of the south, Bangkok day trips can include anything from national parks to temples to markets. So when you feel you’ve had one too many Bangkok temple tours and are ready to escape the heat and the madness of the capital, if only for a day, check out any one, or all six, of these best day trips from Bangkok. 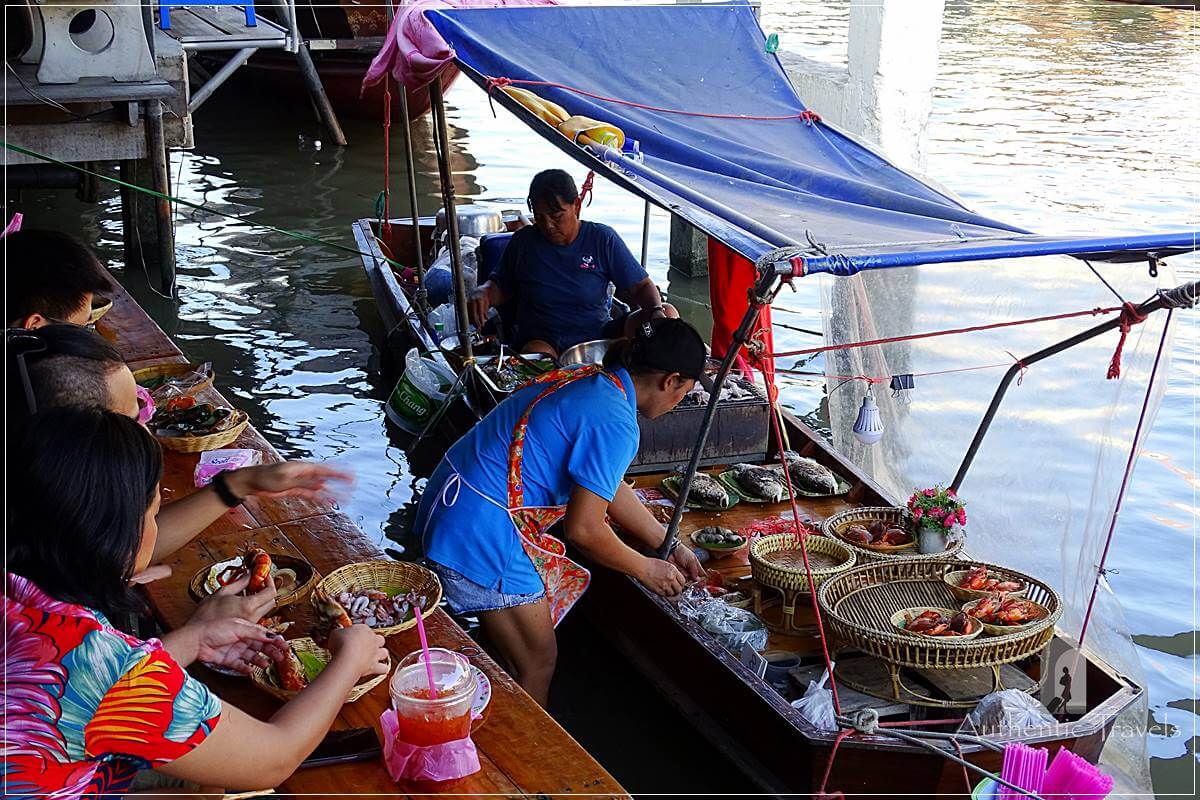 The floating market happens only on weekends – from Friday evening to Sunday evening. Amphawa market takes place along the main water canal with the same name. Visitors walk on the sideways of the canal, stop in front of the boats selling food, and eat there. Some of the boats even arrange a sort of small pavement terrace with a few chairs and you can order food on the concrete parapet of the riverbanks.

How to Reach Amphawa Floating Market

Amphawa Floating Market is situated 70 km south-west of Bangkok, close to the highway that connects the capital to the southern part of the country. There are direct minibusses from Bangkok Pinklao Bus Terminal to the small village of Amphawa. The minibus stops right in the center of Amphawa, a few hundred meters from the iconic floating market.

What to do in Amphawa Floating Market

Except for eating the street food (which is something iconic for Thailand), from Amphawa you can take boat trips to five nearby countryside Buddhist temples or see fireflies in the evening. The main canal filled with boats looks pretty similar to Venice – a reason why Amphawa is also called the ‘Venice of Thailand.’

It is common to do the Train Market in Maeklog in the morning and then go to Amphawa Floating Market in the afternoon. The two markets are pretty close to each other (neighboring villages) so it makes sense to visit both of them on the same day trip from Bangkok. 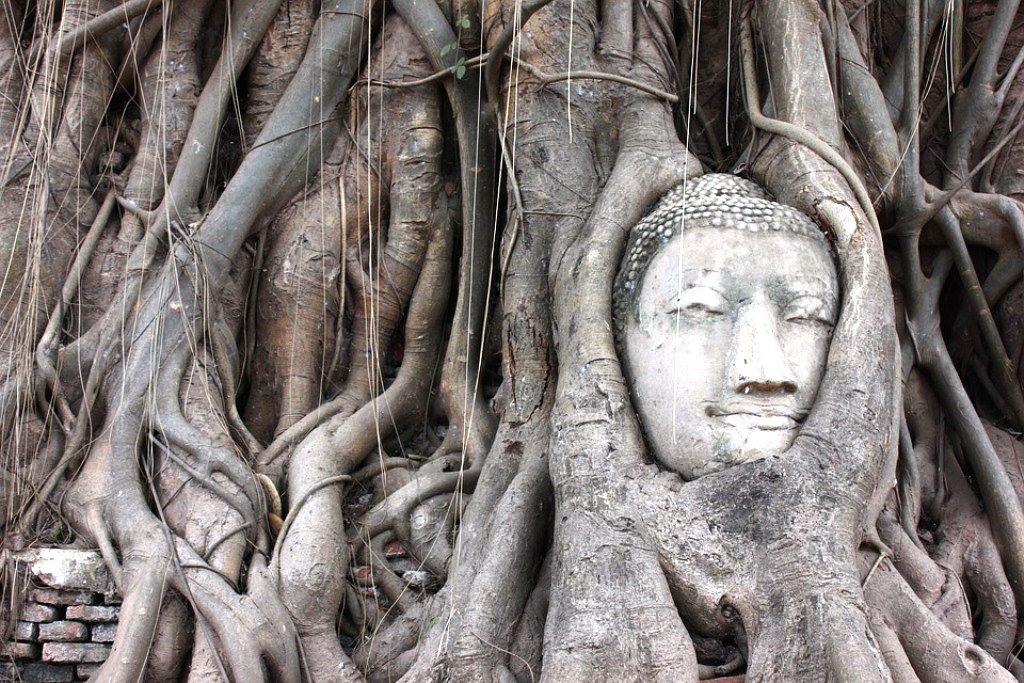 The ancient capital city of Thailand, Ayutthaya, is one of those places in Thailand which is going to leave you spell bound with its stories and historical architectures. Being centrally located between China, India, and Malaysia, this city was once flourishing and was inhabited by millions of people. Its downfall came when it was invaded and destroyed by the Burmese in the 18th century. Currently, Ayutthaya shows you only a fraction of the magnificence of the ancient capital through the ruins left behind. Ayutthaya had also been declared a UNESCO World Heritage Site for its historical and cultural significance in 1991. A day trip to Ayutthaya is one of the best things you can do while you are in Bangkok, since it’s located just 90 minutes (approx. 87 KM or 54 miles) from the center of the city.

How to Reach Ayutthaya

Ayutthaya can be conveniently reached by train from Hualamphong Station which is located at the city’s center. The trains from Bangkok depart for Ayutthaya every hour and the journey takes up to 2 hours. Alternatively, you can take a bus from Mo Chit Station or hire a taxi to reach Auytthaya.

What to do In Ayutthaya

By: Caitlin, The Country Jumper 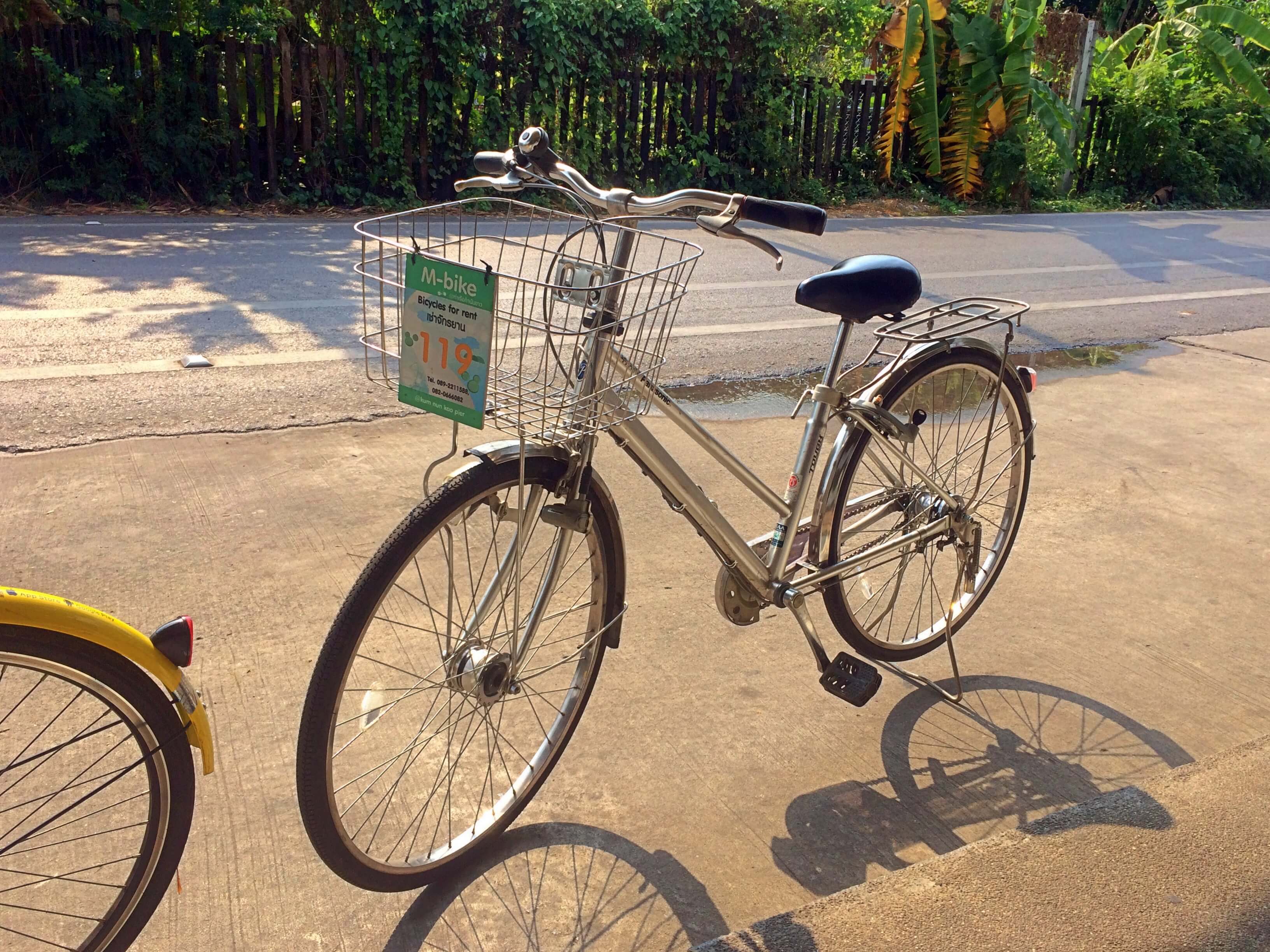 Known as Bangkok’s green lung both for the prevalence of trees in the area as well as for the shape the river forms around this spit of land making it look like a single lung, this is a great place to escape the noise and pollution of Bangkok without too much effort.

How to Reach Bang Krachao

Ban Krachao is technically in Bangkok, but it’s on the edges. I was staying at Jam Hostel, up near Khao San road (a great hostel, by the way) and from there I get on a bus all the way to the pier. I took bus number 47 to the last stop which drops off just near Klong Toei pier, from there, walk down to the pier and get a small long tail across the river for about 10 baht.

What to do in Bang Krachao

Rent a bike. There will be bike rentals on the near side of the long tail boat for you to take across, skip these, they are also available on the other side which saves you the headache of having to haul a bike on and off the boat. Once you get to the far side of the island pick up a map. There aren’t many roads but it is possible to get a little turned around. In addition to riding on the roads there are elevated platforms which cut through the woods. Be weary as parts of these have no railing and can be a dangerous fall if you’re not careful. I walked my bike when I felt like adventuring down one. But riding on the roads is just fine as they are pretty traffic free and nicely shaded. There are a handful of coffee shops and restaurants along the road for refreshments. Be sure to wear lots of sunscreen and bring plenty of water, it may be shady, but it’ll still be scorching hot!

By: Fiona Berry, Passport and Piano 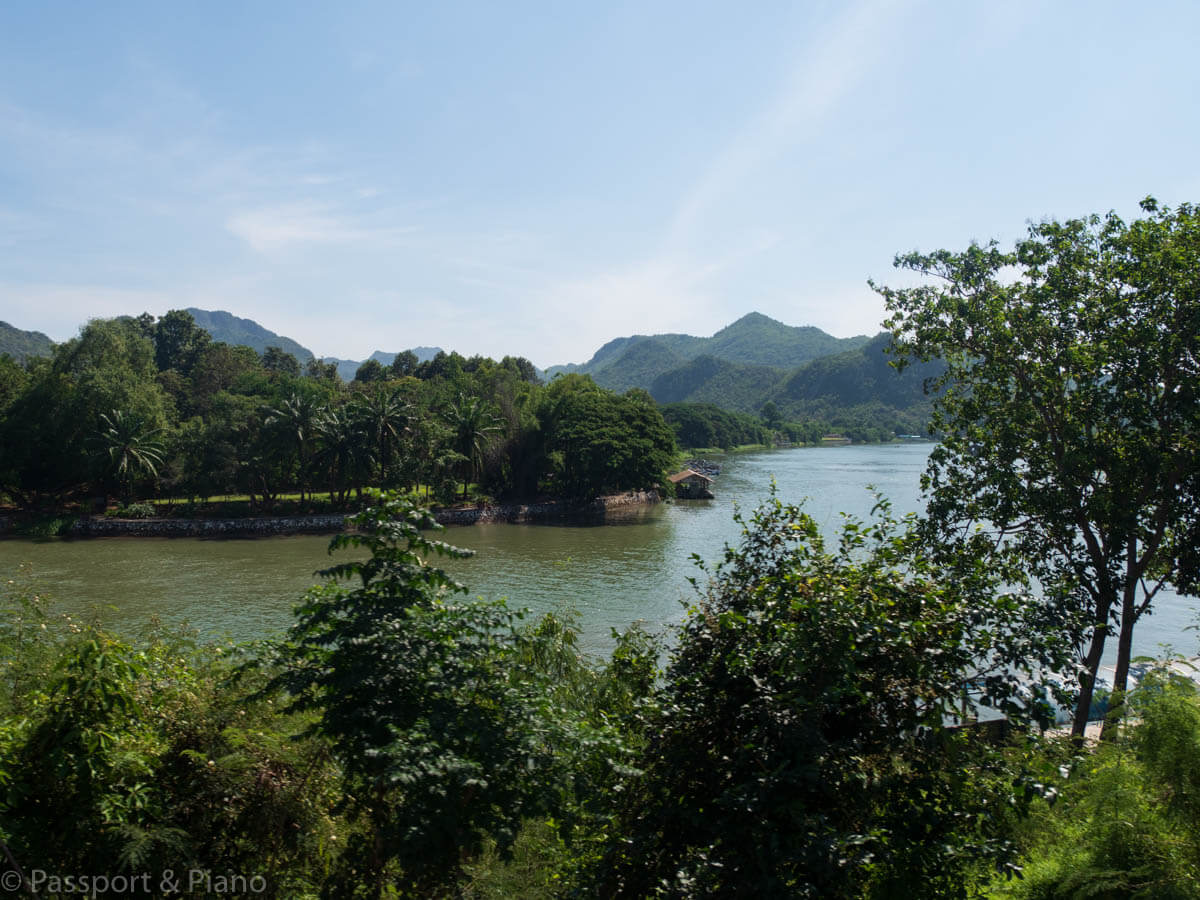 Kanchanaburi makes for an excellent day trip from Bangkok.  The area is steeped in World War II history and there are several National Parks to explore if you prefer the outdoors.

How to Reach Kanchanaburi

The easiest way to reach the area is by booking a Bangkok Kanchanaburi tour, but it is possible to travel there yourself by train.  There are two departures a day from Thonburi station, and the journey takes approximately two and a half hours.

What to do in Kanchanaburi

Most tours include a visit to one of the museums, a ride on the Death Railway train, and of course a visit to the famous bridge over the River Kwai.

You can also include a visit to Erawan National Park and Hellfire Pass all together into one day trip in Bangkok area.  The 7 waterfalls at Erawan are stunning. The water is a beautiful turquoise color, and the view from the 7th tier is magnificent.

Hellfire Pass is so called because of the thousands of torches that could be seen when the prisoners of war were made to work through the night on the Burma to Thailand Railway. There’s now an informative museum which is well worth a visit, and if you have time, you can take a walk along the passage. Be warned, the heat of the jungle is fierce, but it’s a poignant and stunningly beautiful journey.

If you wish to spend longer in the area, there’re plenty of hotels. The floating bamboo houses on the river are particularly stunning and offer a fabulous retreat from the hustle and bustle of Bangkok.

By: Danniela Ramos, No Hurry to Get Home 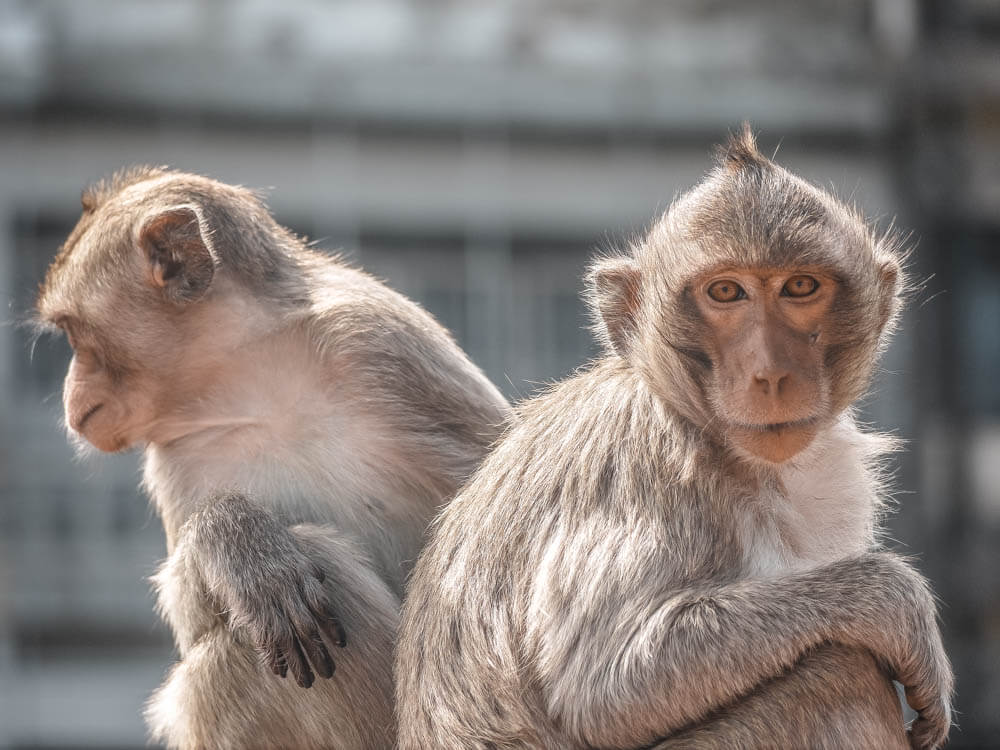 Aside from the monkeys, Lopburi itself is an interesting place for history buffs. Being one of the oldest cities in Thailand and the second capital after Ayutthaya, the city also played an important role during the Khmer Empire.

How to Reach Lopburi

Take a mini bus from Mo Chit Bus Station for 120 baht, they leave frequently throughout the day, so there is no need to make reservations in advance.

What to do in Lopburi

Lopburi would be a forgotten town if it weren’t for its furry residents: crab-eating macaques. You’ll find hundreds of them hanging out at Phra Prang Sam Yod and Phra Kaan Shrine.

These cheeky monkeys have well gotten used to the presence of humans, and they won’t hesitate to jump over you or try to steal any shiny belongings you bring along!

If you happen to be in Thailand during the last weekend of November, check out Lopburi’s annual Monkey Buffet Festival, too! Held at the Phra Prang Sam Yot shrine, this huge festival pays tribute to Lopburi’s macaques by laying down a massive buffet of fruits.

Sitting three hours south of the buzzing capital, Sam Roi Yot National Park is like another world. Its landscape is made up of hundreds of jagged mountain peaks, marshes and wetlands, jungle and bamboo forest, and palm lined beaches to top it all off. There’s something for everyone in Sam Roi Yot: nature lovers, beach bums, culture geeks, wildlife watchers, and more.

What to do in Sam Roi Yat National Park

Head to Khao Daeng for a short but challenging hike, epic views over the national park, and to visit an untouristy local temple (the grounds of which are home to one of the park’s biggest monkey populations!). Make your way to Brasserie Beach for a quiet afternoon on the sand, away from the crowds. And of course, you can’t leave before you visit the iconic temple hidden away inside Phraya Nakhon Cave — but prepare yourself for a solid hour long hike to get there!

Have you been to any of these spots or another cool day trip from Bangkok? Let us know where you went and how it was in the comments below! 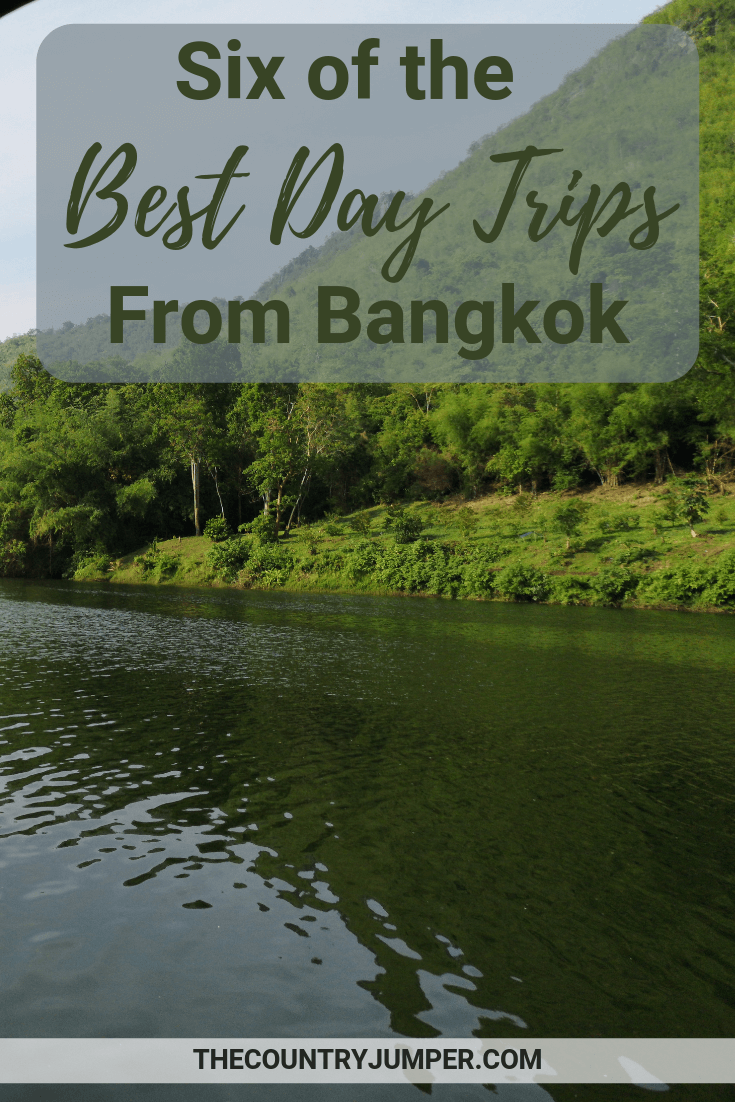