Horses are everywhere in Cuba. They’re used for everything from pulling tourists around Havana to working land and cattle in the countryside. Unfortunately, not all of these animals are treated as well as they ought to be. In Havana, the carriage horses are parked in blazing hot heat with no water while their drivers lay out in the shade, cerveza in hand. Out in the country, ribs stick out and saddle sores are apparent. I know I needed to take care when decided who to ride with. But I also knew I needed to ride, so I decided to go horseback riding in Trinidad.

In Trinidad you are inundated with offers on the street of: ‘ride horse to waterfall’ a great example of literally everyone in town jumping on the band wagon of their one successful neighbor. I was not going to be booking my ride on the streets. I booked instead through Airbnb experiences.

Here’s the link to the specific tour I went on.

Not only was this the only way I’d found to circumvent my spending limitations (why did I have these spending limitations? I wrote about that here) but it also seemed like one of the few channels which would ensure some amount of accountability. Alternatively, many guest houses will book a tour for you, this should also hold those involved responsible. It’s all about making sure you have a way to know who they are and review them should you have to. The men on the street, no way to do that.

Looking for somewhere to stay in Trinidad? Booking.com is a great resource for finding accommodation.

I walked through the streets of Trinidad just before 9 AM to meet my guide at the given address. I was the only one on my tour he informed me and, he also said, we’d be walking 15 minutes before mounting.

We walked back through the very streets I’d just come to the edge of the town of Trinidad. Suddenly there were dozens upon dozens of horses lined up, tacked, in the sun, waiting. It wasn’t a blazing hot day, yet, but I still hoped I wasn’t going to have to excuse myself from a ride on a poorly treated horse. As we kept walking past the majority of the horses he informed me that his horses were at the bottom of the hill. It’s difficult for the horses if you mount on the slope, he said, true, I thought. So that’s a good sign.

Sure enough, we kept walking until we came to two horses tucked away under the bit of shade that was to be found.

One, who I found out I’d be riding, was not quite as filled out as my hunter jumper brain would have liked, but he was slender framed. And, I’d soon find out, plenty fit. Otherwise, I was feeling good so far about Deni’s relationship with and knowledge of his horses. 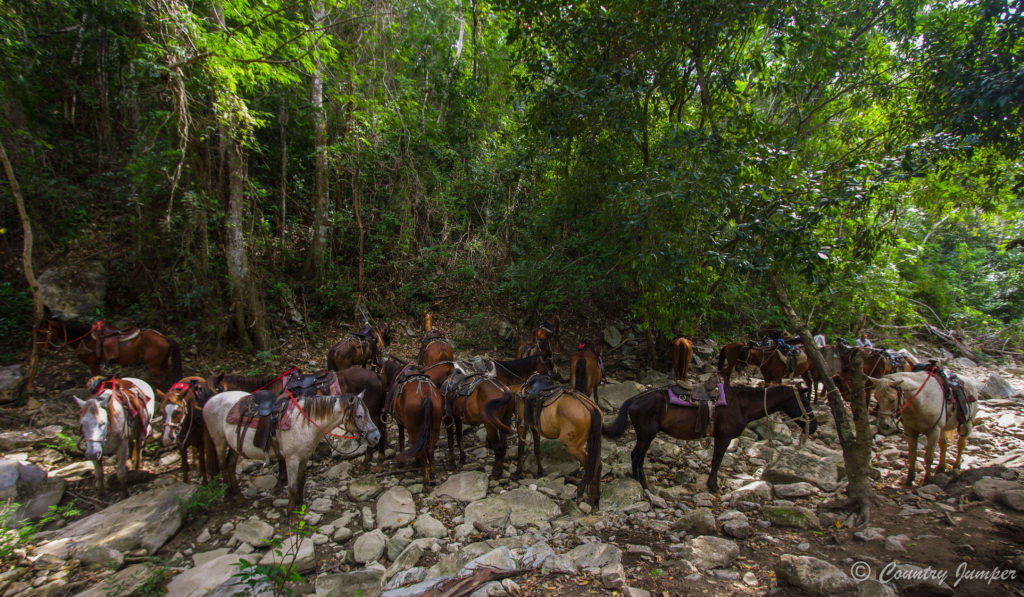 Deni and I mounted up and off we went at a consistent jog. My legs were going to kill me for this.

We chatted as we passed through the lush green countryside. He persisted in speaking Spanish once he’d figured out mine was better than his English (well done, Caitlin). Sometimes I got what he was saying, other times I just nodded politely (well done, Caitlin?). We swapped horse words. I taught him things like mare, stallion, saddle, bit. His pronunciation was atrocious. He taught me the Spanish equivalents, words I’ll never learn in any classroom. I like to think my pronunciation wasn’t bad, but they left my brain the moment they’d entered

We passed other tourists as we went along, some on foot, some also one on one with a tour guide, others bobbing up and down amongst swarms of horses. We made our way through the masses dressed in shorts, the instahusbands clinging to manes in an effort not to fall off, go pro in the other hand. As we approached a flat, open field, my guide inquired if I’d like to have a gallop. Though my ass was now joining my legs in protests, I of course said si.

It’s interesting to note here that the Cubans that I met on this ride by and large train their horses by voice commands. This was a little frustrating for me because I know what I’m doing in a saddle, so I told my horse one thing with my body and my guide told him another thing with his voice. Once I figured out what was going on I tried to tell Deni to stop, to allow me to get my horse trotting when I wanted to trot and walking when I wanted to walk. He laughed and only partially listened. But, in that field, my little pony galloped. 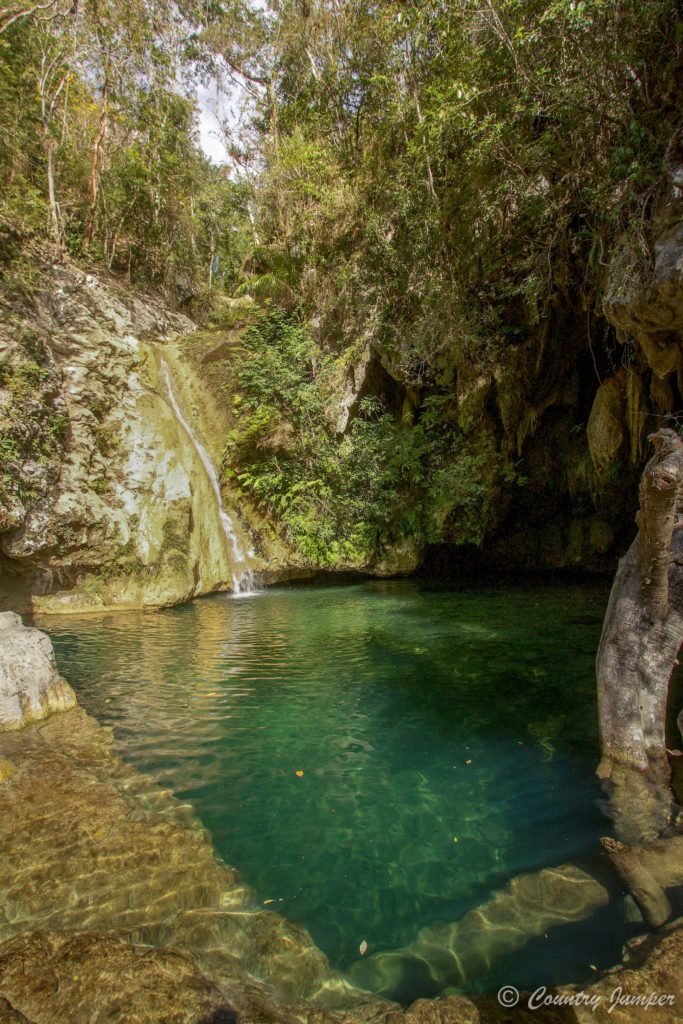 At some point in the ride we caught up to a friend of Deni’s, he had a couple with him. They were Cuban but had been living in Miami since before I was born. That meant they not only spoke impeccable English, but also were free and open with their opinions. It was like striking gold. I asked them everything I could think of from what is the tax structure for people who work with tourism (that’s how I got some of my details for this post) to how has Cuba changed – they’d now been back a handful of times but it had been more than 20 years between when they left to their first visit. They were kind and happy to chat and I soaked it all in.

The three of us rode together to the coffee plantation, a spot where you’re encouraged to spend money on a tiny cup of locally grown coffee. I don’t drink coffee but my new found friends told me I ought to have a few sips, and treated me to it. So, I have no idea how much it cost. But, you don’t have to partake, or even to stop if you don’t want to.

While we’d been sipping coffee, our horses had been parked in a shaded area. Again, unlike many of the others who were stood in the sun. We left our mounts there to rest (others got back on and rode the short distance) and walked through the woods to the waterfall. It was about 15-20 minutes through shaded paths to get to the icy cold water. This spot is the reason why so many people come out there. Me, I was there for the horses. I have an aversion to putting my clothes back on over wet skivvies and even more so to putting socks and sneakers back on wet toes, so I watched over my friends valuables while they dove in and swam about.

We were all hungry so we kept our visit to the waterfall much shorter than others who lounged about in the sun, and trekked back. I realized when we got back that none of the horses’ girths had been loosened. The girth, if you don’t know, is the strap that goes under the horse’s belly to keep the saddle in place. Loosening it relieves a lot of pressure and is something I always do if I’m out of the saddle for more than a minute. This isn’t one of those, oh my god boycott everything issues, it’s just one of those, I wish I spoke better Spanish so I could have mentioned this and maybe improved the lives of these horses just a touch issues.

Back in the saddle we continued on only a short ways to our lunch break. It was there I inquired where the water for the horses was. They drink at home, was the answer. There we all were, desperate for food and drink and our horses had neither while they waited. A horse can go up to 4 days without water, but then again, so theoretically, can a human, but that sure as hell doesn’t mean it’s something I want to try. Again, this is not enough for me to say, don’t go, it’s again a moment where I wonder how easy it would be to have a quick discussion and get a big trough outside the restaurant that the horses go to everyday so they can be offered a drink. 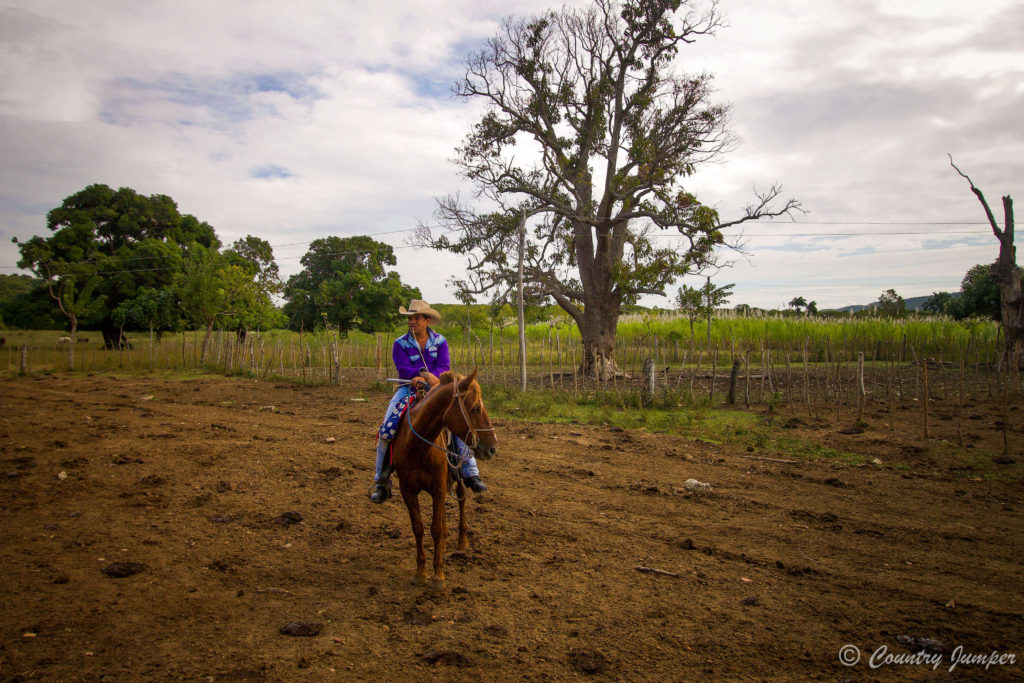 Deni in all his glory

Besides the lack of water for the horses, lunch was actually quite good, a grilled pork, in all its piggish glory was laid out, we were the first to arrive and cut into it. I did though have to remind my guide that lunch was included, be mindful of that if it’s the tour you get, don’t ‘accidentally’ pay twice.

From lunch, it was only a few minutes back to the edge of town where we hopped out of our saddles, thanked our horses, and got a buggy ride back into Trinidad.

So my thoughts? This is a difficult thing to measure, how well animals are treated in a country where the humans are given ration cards, where the humans don’t have access to a fraction of the luxuries that I do because of goddamn politics. Would I have been presented, in the USA, with a horse that looked like the one I rode in Cuba, I don’t think I would have gotten on. What was the treatment that led the horse to not be quite fat enough? What else was going on in that stable with that horse? But there in Trinidad, perhaps that’s as good as it gets. There aren’t fields upon fields of grass to be hayed each summer. How can that much land be given up to feed horses when the lands to grow food to feed humans aren’t enough. What I do know, when my horse took two lame steps near the beginning of my ride, Deni was out of his saddle in a flash lifting my rides leg and pulling a nail out of the sole of his hoof. What I do know is that it was clear that he knew what he was doing, that he’d been doing this for a long time, that given what he had to deal with, he was doing his absolute best. I do believe that what is ethical and o.k. has to be judged by the conditions which surround it. Is there shade to put your horse in and you’re not using it? That’s not cool. Is there not quite enough food for humans and you’re doing your best to keep your horses fit and healthy given what you’ve got. That’s gonna have to be cool.

Note: Horseback riding is an inherently dangerous sport. Horses are unpredictable animals with minds of their own. While the horse I rode in Trinidad was very level headed and easy to ride, riding accidents are common. Be safe, wear a helmet. And, buy travel insurance. I recommend World Nomads, I’ve used them for all of my travels for years now and when I’ve had to file a claim (got bit by a pig in The Bahamas, silly Caitlin!) it was quick and painless.

In the end I really didn’t have any issues with the tour! Thanks for reading Carly 🙂