In continuing with resharing my early blog posts, written during my time studying abroad and living in Meknes, Morocco, this piece is from the time when I first arrived to my new home. Edited only for some grammar, I’ve left my eight years ago thoughts to shine through – and where I’m now skeptical of those thoughts I’ve made note of the edits.

To catch up on the story read about:

My arrival to the group in Spain

The journey across the strait to Morocco

I’ve arrived and begun to settle into life in Meknes. Our apartment here is certainly luxurious by local standards. We have running water, hot showers, so far whenever we need them.  A washer, no dryer. A stove, no oven. A doorman, an elevator. A TV and satellite. 3 bedrooms, 2.5 baths, for 5 girls. We have a ‘maid’ who comes 6 days a week to cook and clean for us. A huge luxury and delicious meals! I’ve wandered the streets of Meknes getting my bearings and exploring the shops. Yesterday we travelled as a group to the Medina in the old city. The Medina is a maze of souks selling all sorts of goods from pastries, to meats, to knock off Louis Vouitton, and hand crafted metal works. 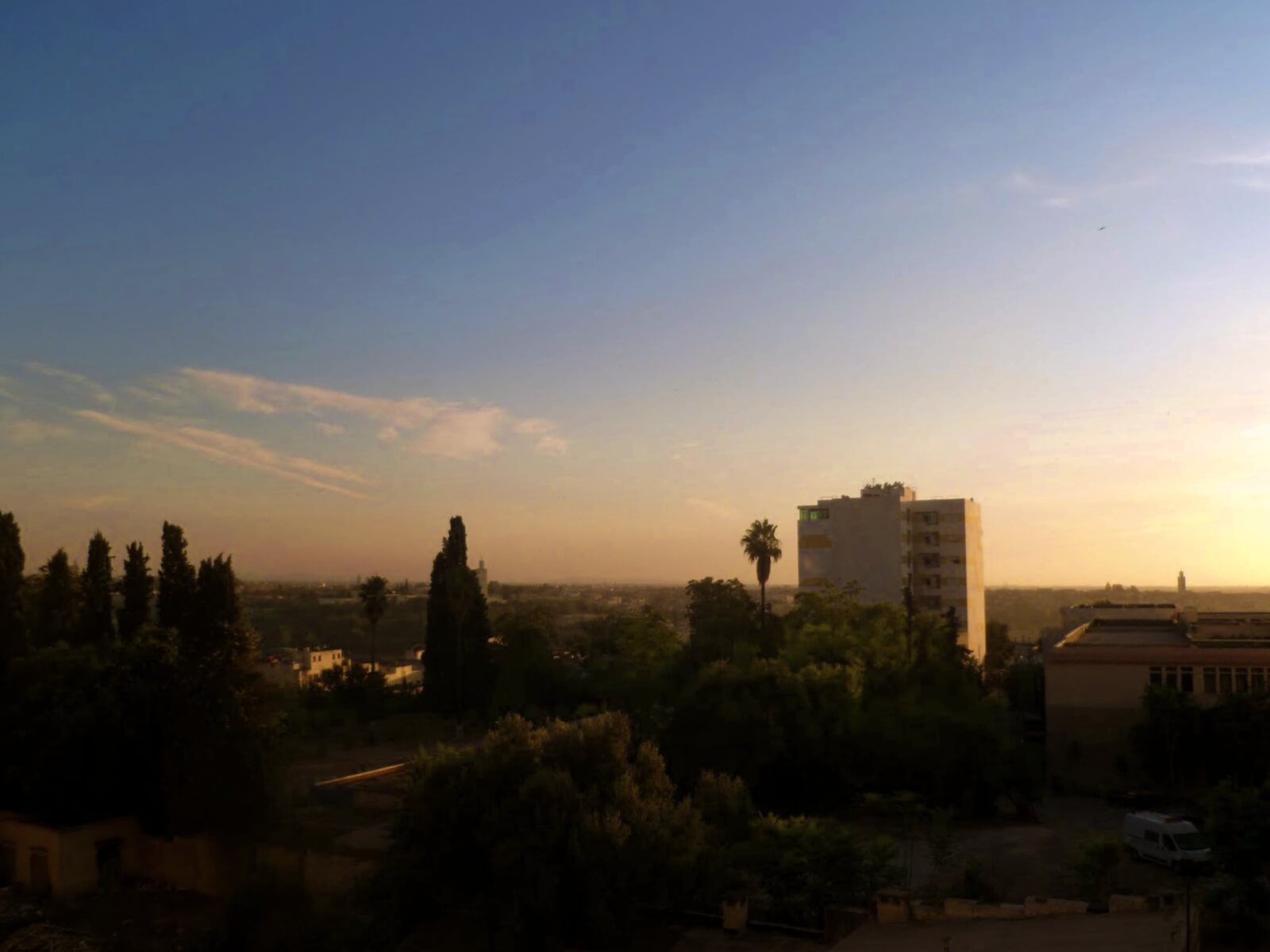 The day time view from my balcony

Meknes has two main areas divided into smaller sections. The old and the new city. Our apartment is in the new city, more specifically the French quarter. Cafes and restaurants are abundant around the neighborhood but we’ve learned that often as women we are meant to sit upstairs, not on the sidewalk with the men. The upstairs, often out of sight from the street, is usually full of young, well-dressed men and women on “dates.” Of course if you asked they are either cousins or married since dating as a non-engaged couple is religiously and culturally illegal. However, as I’ve begun to meet and talk to local Meknes girls their boyfriends (or cousins) are hardly a taboo subject. 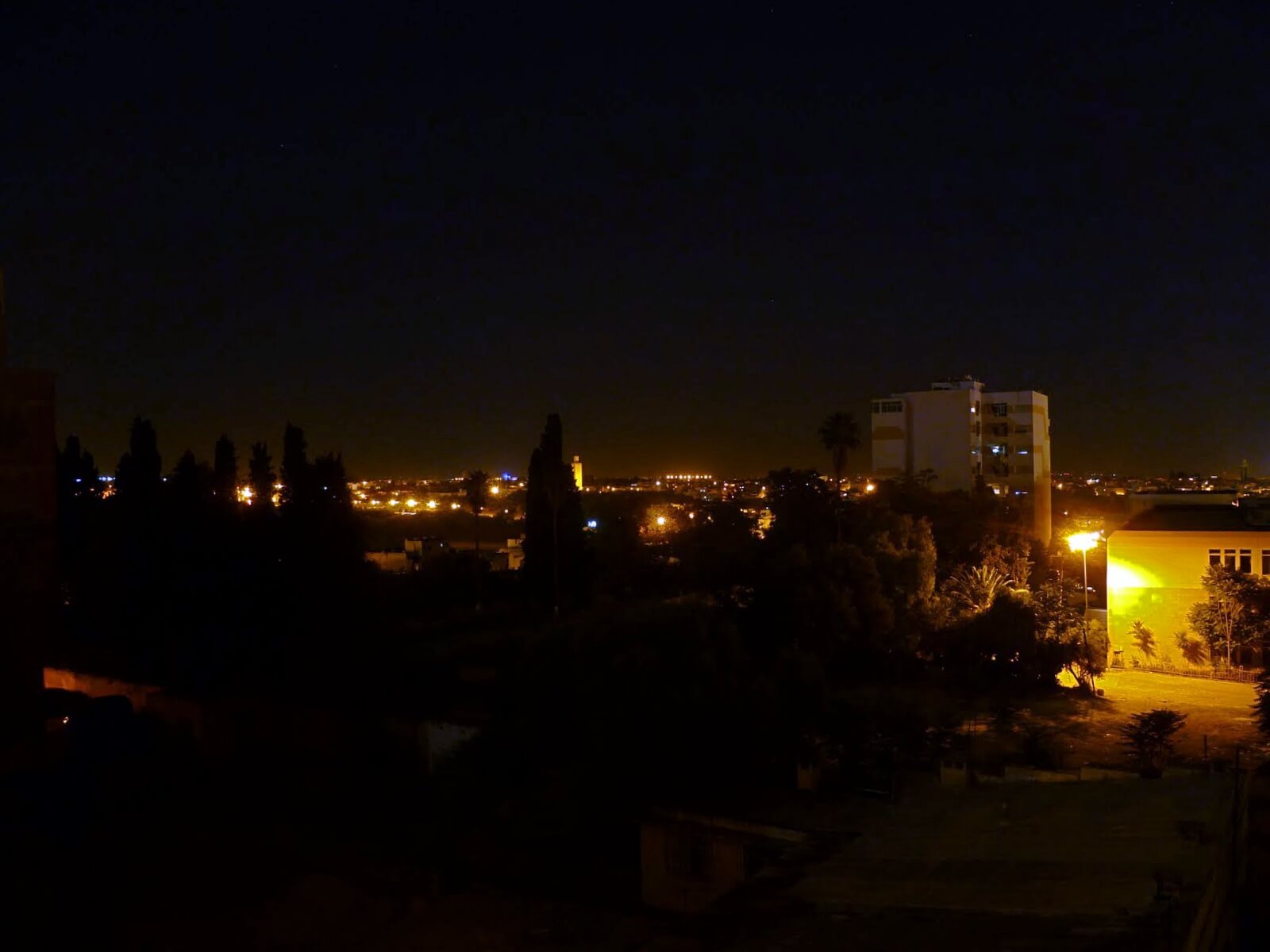 The night time view from my balcony

I’ve befriended a girl in the group named Sara. An Iranian American Muslim with olive complexion and brown eyes who covers herself with a hijab. I’ve spent a great deal of time walking the streets of Meknes next to Sara and I’ve also spent a great deal of time walking the streets with Madison, another blonde-hair, blue-eyed, pale skinned girl like myself. There is undoubtedly a difference in the attention I get from being with one companion to the other. I’m not sure if it’s an issue of respect because the boys do ‘court’ local girls on the streets as well but I believe they certainly view me as a more difficult target when I am walking next to a perceived local girl. Of course Sara is not actually local and in fact every time we go into a store the shopkeepers look to her to speak Arabic. She speaks about five words. After it’s made clear she can’t communicate there is obvious judgement from the locals, she was once asked how she read Quran. A very personal and intrusive question from a stranger. She quickly explains to everyone she meets that she is Iranian, she speaks fluent Farsi, and she can read Arabic, and does read the Quran in Arabic, she just can’t speak it. All respect is immediately restored.

It’s lovely to look back and see all the cool things you’ve already done. Sounds like it was an amazing experience!

It was an experience for sure and definitely shaped me in so many ways! Thanks for reading Coni