Did you know I’ve existed in the blogosphere for eight years now?

Yep, I started my first blog on blogger just before I left to study abroad in Morocco. That was August, 2011. I’ve since created and recreated my blog five times, finally finishing with this one (because I love extra work).

I always enjoy looking back at old writing and stories, so I thought you might like to as well!

My very, very first post was only a few sentences long. So here are the first two I wrote…

In just two short days I leave behind the devastation Irene brought to Vermont to hit the air and make my way to Morocco. On Thursday, September 1st, 2011 I will fly from Boston (at around 6 PM) to Dublin to Madrid, switch airlines and fly to Granada, Spain. If all goes as it should I will arrive in Granada at around 4 PM on Friday, September 2nd. Door to door that’s a solid 26 hours, but I’m ready. My bags are packed my books are ready and I’ve bought myself a new neck pillow to sleep through the air. 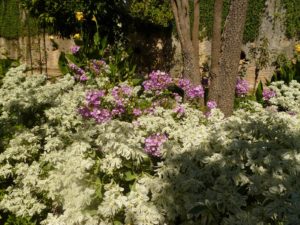 With a one hour layover arriving in Dublin and rushing through customs, a switch of airlines in Madrid leaving security, rechecking a bag and going back through…all in Spanish, I arrived in Granada 24 hours after driving away from home exhausted but excited.

My “college level fluency” of Spanish slowly came back to me and I found the ISA director and his girlfriend and we piled into a taxi and headed to the hotel. I met all 26 ISA students, 22 girls, 4 boys. Soon a group of 15 of us, all strangers to each other but noisy with excitement and introductions, obvious Americans drawing stares everywhere we turned, hit the streets of Granada and filled the tables of our first tapas restaurant. We quickly discovered that no matter what drink you ordered from a Sangria to an agua, free tapas always appeared at the table. Over the next few days I had tapas including all varieties of meat, cheeses, veggies and fish. It wasn’t until the last day in Granada when a few of us expressed our disappointment in the lack of awe in the tasty but simple food that one of the directors pointed out the best places we should have chosen….I guess that just means I’ll have to go back.

Despite the slight let down in the food we ate, I found plenty to fall in love with in the little city of Granada. My first full day our director took us on a waking tour of the city, through markets, squares, lookouts, cathedrals, dodging fortune tellers and stray dogs. We explored back alleys, broken cobblestone hills and it wasn’t apparent until a few days after, when we had found our bearings, that all of this variety, activity, and beauty was packed into a compact city easily walkable and always alive.

Over the almost four days I spent in Granada I discovered and loved a city, its people and their way of life. Streets were packed with well dressed men, women and children from 10 AM to 6 AM (Less 2:30 to 4:00 PM-siesta time!). Dinner was most often between 9 PM and midnight. Never did a waiter rush you to pay your check or to clear your table, sitting for hours was the norm, relaxing, taking life slowly and easily was the way of life. After dinner everyone from 12 year olds (or so they looked) up to men and women in their 50’s hit the clubs. Some did not open until 12:30 AM, most stayed open until 6 and one ‘after 8,’ as implied, opened as many American would be bustling to work, for the final Spanish stragglers of the night. 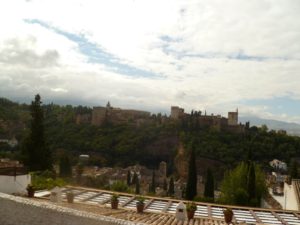 In this active but relaxing city I toured the Alhambra, a stunning castle with perfectly pruned, blossoming gardens and a complex and twisted past. I watched gorgeous Spanish women with jet black hair and piercing eyes flamenco dance amongst a bold contrast of red and black. I stayed out until 6. I ate Kebob. I went to an Irish pub, and a Spanish tapas bar. I practiced my spanish and I fell in love with a small city that truly never sleeps…except during siestas, yet another Spanish tradition I could get used to! If I were to someday be stranded in Granada I cannot say that I would be upset. 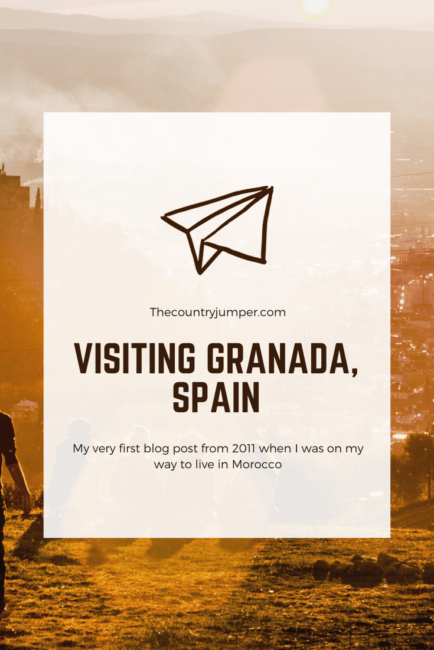 That’s a nice story, through which I felt your excitement. I’m a blogger also and now I’m wondering what my first blogs were like. You motivated me into doing a bit of digging in the archives.

Yes, do it! It’s fun to read back to see who you were when you first started it all 🙂

It’s so sweet of you to share your first blog post! It’s so exciting when you press that “publish” button for the first time! Granada is such a lovely city! I need to go back 🙂

I loved visiting Alahambra. What a treat that you got to go there and write about it as your first ever blog post! Do you think your writing style has changed or your blog writing techniques in the last 8 years??

Oh for sure! I mean I was still in college when I wrote this. I’ve changed and as such my writing has changed. 🙂

Ooh I love to read back on my first blog posts too! I found out that I tended to write on what I experienced and felt on the trip during my earlier posts. Is it like that for you as well ?

Oh I still right like that! I think that’s what makes a blog worth reading 🙂

That is certainly a long time to be in the blogging world! I hope that I continue to stick with it and progress as you’ve done. It’s really interesting to look back on posts to see how far you’ve come not only in your travels but in your writing, style, posts etc. Keep it up!

Your post just reminded me how exciting it was to press the publish button for the first time. Digging through the archives and comparing your old posts with your more recent ones sure sounds cool and is something I’ll definitely start doing more often.

Back then I was only writing for family and friends so it was a very different type of publishing 🙂 I just enjoy reading what I wrote and getting transported back to that place again!

So excited for you! Best wishes for an amazing journey ahead. Reminds of the days when I started blogging six years ago.

It’s fun to look back isn’t it? Thanks Suman 🙂

Wow, eight years, way to go! I bet it is awesome to look at the progress you have made. I have only been blogging for about a year and it is already strange to look back at my first posts. Your post about the Alhambra took me back to my study abroad days in Spain!

I know, its a long time isn’t it!? Where in Spain did you study?

I was in Toledo, Spain 🙂

Awesome! I’ve actually never made it to that part of the country!

Eight years! Thats a long time. You have come a long way. Your first blogpost is really shows your excitement of coming to a new city and exploring it. I had such experiences written in a diary, because 10 years back I did not know what a blog was and I used to write to dear diary. Really loved reading through this.

Thank you Amrita! Whether or not it was ever published, I think it’s so great to have those early memories to look back on 🙂