In 2011 I completed my final semester of undergraduate university with study abroad in Morocco. With the program provider ISA I studied at Moulay Ismail University in Meknes, Morocco.  I recently republished my very first blog posts which were from Granada, where I met the group who I went to Meknes with. We spent a few days there before crossing the strait. Here are my reflections from the time on the next step on that journey (edited only for some grammar, I’ve left my eight years ago thought shine through – and where I’m now skeptical of those thoughts I’ve made note of the edits)…

Our group headed out of Granada early Tuesday morning, September 6th. We bused to the coast of Spain and boarded the ferry to cross the strait of Gibraltar. The strait, despite obvious sewage and gas leaks from the ferries, cruise ships, and commercial boats, is some of the bluest water I have ever seen. (2019 note: girl just wait!) We arrived to the other side in about an hour, got our passports stamped on the boat and checked twice more as we walked through the port and parking lot. We got on a bus to bring us outside of the security check points to meet our ISA bus, while the metal detectors were turned off and some students wondered if we should be waiting for officials to tell us what to do it was obvious we were not passing into Morocco unnoticed.

Another hour long bus ride brought us to the city of Tangier. Our director told us that Tangier, because of its port creating an easy route for drugs from Africa into Spain, was historically, and possibly still, the ‘sketchiest’ city in Morocco. He warned us that the men would stare, follow, and propose marriage. But, as an eves dropper who spoke fluent English said ‘they are like mosquitoes, annoying but harmless.’ (2019 note: malaria?) In a group of 22 girls and 4 guys our director said we should split off into groups with one guy in each just to get our bearings. Of course the cliques had been formed at this point and the boys stuck together so I headed off with a group of 6 or so girls. The mosquito man followed us telling us to come on a tour of the ‘real’ Tangier with him. Of course we did not. 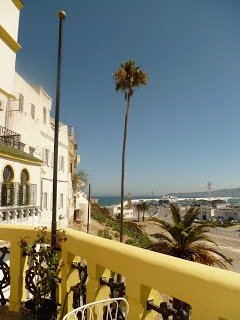 The men certainly are vocal about their feelings. Many of them know one or two English phrases ‘is good’ ‘so beeyooteaful’ but many don’t, and perhaps they’re saying something crude but at this point I understand no Arabic so their whispers from the corners mean nothing to me. In my opinion, they are much less disruptive to my everyday than the men who stand in Times Square begging you to come to their comedy show or bus tour. (2019 note: even December 2011 Caitlin didn’t agree with September 2011 Caitlin on this point) However, in a religious culture that stresses modesty and seriously limits the acceptable interactions and relationships between men and women, the men certainly don’t seem to heed the warnings. Instead, they sit all day in cafes on the sidewalk lined up against the wall watching women parade by.

Based on my first impression of Morocco after arriving in Tangier, I quickly notice some glaring differences in this developing nation, my first. The cleanliness being one of the largest. The streets of Tangier were lined with trash, bottles. paper, dirty puddles, and other garbage. Traffic, few street signs, no cross walks. We were warned that we would have to dodge cars crossing the road. But in reality it’s no different than NYC except that the drivers are much more courteous. 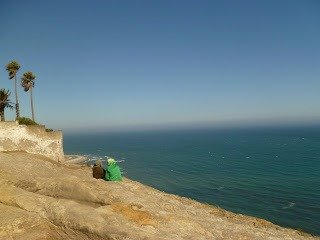 Women by the sea in Tangier

After jumping trash piles and dodging cars through the middle of the street I realize that the man peddling watches on the street, and the janitor cleaning the hole in the floor toilets all speak approximately five languages. And I realize that the glass of orange juice I ordered at a rest stop has been freshly squeezed all of 30 seconds ago. Every meal I eat is packed full of delicious spices, fresh fruits, and veggies. It becomes evident that all of the luxuries we have from all the developing we’ve done in the United States have actually eliminated so many of the true luxuries this developing nation has. (2019 note: I couldn’t agree more)