Here is everything you need to know when planning on visiting Ifrane, Morocco.

If you’re new here, the first thing to know is that I studied abroad in Morocco in 2011. I blogged while I was there. But that was a lifetime ago when I was on a hosted platform (read: ads all over the place) and no one else was doing it so the world of blogging was non-competitive, non-glamorous, and non-flowy-dress-filled. But I think the stories from that time are still worth sharing. So, with a bit of polishing and some additions, here, again, is a blog from 2011.

Located in the Atlas Mountains, Ifrane is a small inland city. The closest major city is Fez. To get to Ifrane from Fez takes slightly over an hour in a car (if all goes well). It’s a similar distance from Meknes to Fez.

Unfortunately, there is no train station in Ifrane so while trains are an option elsewhere in Morocco, they are not to get you to Ifrane.

Taxis, though, are definitely a good way to get to these mountain areas. Even if you are on your own taxis are affordable. It’s estimated that you wouldn’t spend more than $35 for a taxi (each way) to Ifrane. And that can be split by up to five people.

What is the Weather in Ifrane

While you may have images of Morocco being a hot, dusty, sun-drenched wonderland, that image is only partially true. Morocco has seasons and the weather changes dramatically.

Keep in mind though, that Ifrane is in the mountains. So even though much of Morroco might be scorching, it’ll be noticeably cooler up in Ifrane.

Ifrane generally sees summer-like weather, with temperatures averaging in the mid-70s, from mid June through early September. During this period there is little, if any, rainfall. Winter in the mountains is from about mid November to mid March. While the average temperatures remain in the mid-50s it can easily get down into the low-30s or high-20s. Something else of note about winter in Morocco is how dry it is. This is, perhaps, obvious, but you will notice it on your skin. Bring a thick lotion with you.

What to Pack for Ifrane

Come on now, you need the same things you need always. Undies, a toothbrush, and your camera. Really is there anything else you’ll ever need when you travel anywhere ever?

O.K. but fine, here are five things you should pack for Ifrane, specifically:

I had this massive fuck-off sun hat that I bought before I went to Morocco. It was obscenely large but also very packable. And, it protected my skin like crazy. I don’t know what bran that hat was but here’s a cool one from Anthropologie that’s a different vibe all together but will protect your delicate skin all the same. 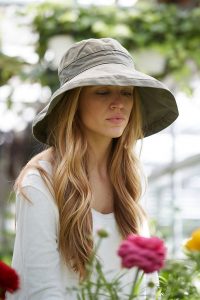 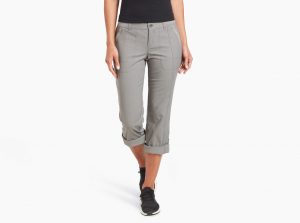 Ifrane is in the mountains and if you really want to see the nature there you should go for some walks. These won’t be strenuous hikes, but you’ll still want decent walking shoes to keep you stable and protect your toes from rocks and roots. I am pretty reliably a Nike girl… 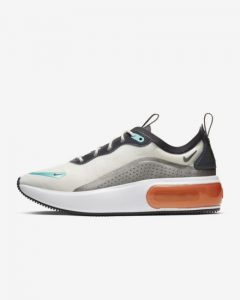 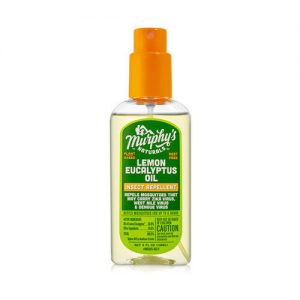 For the monkeys. Otherwise they might steal your camera (one of only three essentials! Can’t be having that). I recommend purchasing bananas in Ifrane and not packing them in your suitcase. 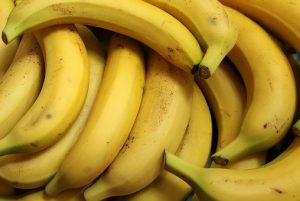 Where to Stay in Ifrane

Riads rein supreme in Morocco. Hotels can be dodgy and probably best avoided. Riads though, small guesthouses with inner courtyards and often an intense level of decadence, can be a tranquil oasis from the chaos of the outside world. All of the being said, there is not the same option for accommodation in Ifrane is there is in the major cities fo Fez or Marrakech. This means if you’re planning to stay overnight while visiting Ifrane, Morocco,  you should book your accommodation in advance.

I do not remember where I stayed in Ifrane – likely a hostel as I was with a group – so the following is based on my research, not my experience.

Situated outside of Ifrane, this inn has highly-rated common space including a pool and kid’s area. You can eat on the premises and the hosts are meant to be delightful.

My Original Blog from Ifrane

It’s Sunday evening and I’ve just arrived back to Meknes after a weekend in and around the Atlas Mountains. After a month of dirty, exhausting city living it was wonderful to get out into nature and breathe exhaust free air again.

ISA brought us out Saturday morning to our first stop in the small town of Ifrane, a perfectly picturesque little village with green, green grass, spotless lawns, perfect squares, an American university, parks and geese. Suburbia in the middle of Morocco. 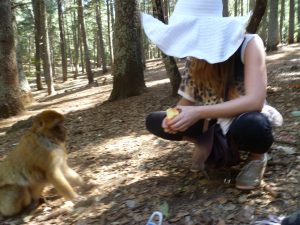 Soon we were back on the bus climbing into the Atlas mountains to the home of our tour guide for the day. He served us a delicious breakfast of crepes, bread, tea, juice, honey, cheese, butter and jam all most likely from the gardens and livestock we had walked past in front of his door. We then headed out across his fields and into the mountains. (Hero would have loved this hike, sheep roam free everywhere!) Coming from the city life we’ve all become accustomed to the hike up the mountain was a sweaty struggle but as we rounded the top we quickly forgot we were out of breath. Monkeys were waiting for us and we quickly pulled out snacks and made friends. I had bought a banana and apple as a mid hike snack for myself but those both quickly disappeared into the mouths of monkeys. And by the way, even wild monkeys fit every stereotype the zoo and children’s books teach-they climb trees and love bananas!

We continued our hike up the mountain-stumbled upon another group of Americans, one from Vermont, made our way to a gorgeous overlook across an entire village, mountains and fields, lost one of the students, found him, climbed back down the mountain and waved goodbye to the ISA bus as a few of us continued our stay in the little town of Azrou for the night.

The next day we piled into a grand taxi (6 passengers + the driver in an old mercedes) for a 30 minute ride up winding roads climbing even higher into the mountains. Arriving in a berber village we began wandering the streets. We climbed to the peak of a mountain on the edge of town, admired the view and climbed back down when standing in our path was a large, old, toothless lady along with her family whom proceeded to yell, very angrily, at us in Arabic (thank goodness we had a Moroccan friend with us to translate) saying that the land was private and asking if we had taken pictures of her house (which we had) because she and her cousin had a feud…yeah, go figure that one out. Our Moroccan friend assured her that we had not taken any photos and after a few minutes of her ranting we continued on back through the town.

We split up and piled back into two Mercedes for the trip back down the mountain. Before long the Mercedes I was in with two others began to thud-the driver slowed down a bit but continued on. The girl with me kept saying it was a flat and 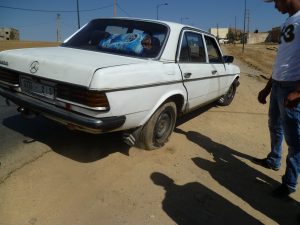 sure enough a few minutes later he pulled off the road with a very, very flat tire. Watching this man attempt to change his tire I thought of all the things my dad had taught me, and this man was getting them all wrong. The picture can explain it all, the car slanted down hill towards the side of the flat tire was just the beginning. After a good ten minutes of watching the driver do just about everything wrong and trying to flag down another taxi, of which there were none, he did successfully change the tire and brought us back down the mountain to meet the rest of our group. Exhausted we ate a quick lunch and took a very hot and crowded bus ride back to our home base of Meknes and back into reality

*Side note: I had to break half way through this post due to Morocco beating Tanzania in tonights football game and the town going INSANE (refer to my soon to be posted facebook posts for video footage) this win means they go to the quarter finals of the Africa cup. 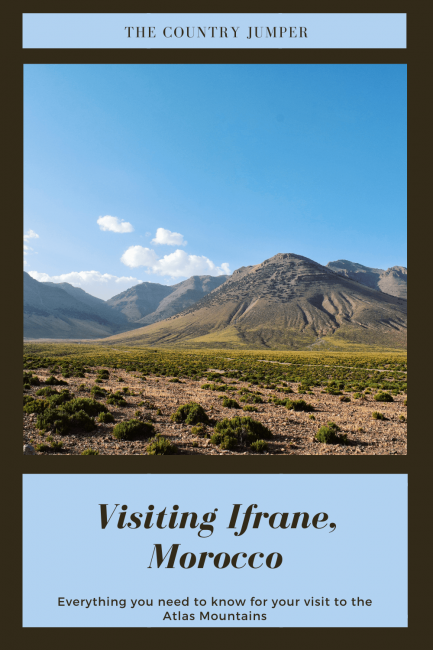 A Day Trip to Fez

A Guide to the Best Frequent Flyer Credit...

Morocco is incredible! And to be honest, I’m definitely one of those people who only pictures desert when thinking about Morocco. The Atlas Mountains look beautiful! I’m so happy to have found this helpful blog because I want to visit Morocco soon!

It’s definitely a diverse country. And while the desert is stunning and totally worth visiting, I think it’s good to have a diverse trip!

Ifran sounds like such an interesting place to visit. I loved your tips about the bananas! LOL!

A true necessity of the trip!

I love that you put to pack bananas! haha when we went to Costa Rica, we saw many stealing peoples bags!

I like the way you’ve combined your original blog post with all the helpful info about visiting Ifrane. It’s a really good way to show off your old words. 🙂

The only place I visited in Morocco that I reeeeally fell in love with was the Atlas mountains, so I would love to explore this area more!!

Thank you! I am half embarrassed by and half love my old thoughts! Did you get to visit the desert while you were in Morocco? It was one of my favorite areas. I was never taken by the cities though.

I laughed at the packing bananas part! I’ve never heard of this place but it looks interesting to visit.

Bananas are the most important!

It seems so beautiful there! Do the monkeys really steal your things!? Regardless, Morocco is definitely on my travel list!

They didn’t steal anything from me but yes, you totally see them grabbing anything that’s grab-able – water bottles, cabers, anything you’re holding in your hands might be gone!!

I wish I would have known about Ifrane when I was in Morocco last year! We did make it to the Atlas Mountains (Imlil Valley) but no monkeys there. This place sounds like it would have been fun to visit too!

I guess that jus means you’ll have to go back 🙂

Beautiful country with such a beautiful culture and people

So many helpful tips!

Thanks! I hope they help you for a visit!

I’ve never been to Morocco! But thank you for these tips, especially what to pack aside from the basics undies, toothbrush, and camera! Haha good tip about the bananas. We don’t want them snatching our stuff, don’t we! LOL!

Exactly! Bribe the little guys away from the valuables

These tips are awesome! I’m sure I will feel super prepared using these tips for when I visit Morocco for the first time. So important to prepare ourselves when we visit a new place and this definitely helps.

Glad you found them helpful! Do you ever plan to visit Morocco?