If you’re wondering is Sachsenhausen worth visiting, my short answer is yes. Read on for the story of my trip and tips on how to get to Sachsenhausen from Berlin.

I visited Sachsenhausen in 2013 during my trip to Berlin.

I spent about four days in Berlin and really enjoyed the city. It was fun and vibrant and young. I went to clubs – which is a must do on a Berlin to-do list – and learned about the world’s ultimate lines. There is an art to getting into a Berlin club. And as a non-Berliner I will not pretend to have any expertise on the matter. I do recommend you find someone local, or at least who has been living there for sometime, to show you the ropes. Of course Berlin has its museums, and its food. All of that is wonderful. Just go get lost in the city. I’m not here to give you a Berlin itinerary, make your own.

What I do recommend doing however, and this goes for any city where it’s available, is a free walking tour. I went with Original Europe Tours and enjoyed the tour enough to book onto their Sachsenhausen trip the following day (Sachsenhausen is not free). Booking with a tour means you don’t have to worry about how to get to Sachsenhausen from Berlin, as the details of the day are sorted for you. I don’t usually do tours if public transport is easily utilized, but I think if you are a solo traveler it’s important not to have to process something like a visit to a concentration camp on your own.

It was a beautiful day with just the right amount of sun and a light breeze to keep the heat down. I rode out of Berlin on a 40 minute subway ride to Sachsenhausen concentration camp. The weather felt all wrong. It felt wrong to be enjoying the day while visiting a concentration camp, like the only weather that would’ve been appropriate was a bitter cold. But it wasn’t.

I went to Sachsenhausen with a tour guide who to my luck was extremely knowledgable about the history of the concentration camp, the Nazi use of it, but also of its Soviet history. Unlike places such as Auschwitz, the buildings at Sachsenhausen have mostly disappeared, a few originals remain and a few have been rebuilt. According to German law they can only be rebuilt using original material. The emptiness of the camp gives it a chilling effect, but what it lacks is the feeling of over crowdedness which certainly existed when the Nazis used it to hold at least six times the number of people it was originally intended for.

The history of the camp and the use of it by the Nazis was interesting, but not entirely new to me. What did stand out though was the way the Soviets reshaped the camp, adding aspects – like the exact minute, painted onto the clock tower, that the camp was liberated from the Nazis – to the reshaping of the camp. But what I was most struck by was the way the German government of today deals with its history.

Nazi Germany is not a subject anyone deals with lightly and it is certainly most sensitive for the German people of today. Before you enter the actual concentration camp gates, you pass a few buildings on the other side of the street. These two massive, unattractive, military style buildings were used to train SS guards. Today, they are used to train the local police force. Our tour guide told us this was Germany’s way of continually reminding its people, especially those gaining a certain amount of power, of the dangers that come with that power and a warning not to repeat history.

One of the barracks has been reconstructed and turned into a Jewish museum. In 1992 neo Nazis broke into the camp and attempted to burn the museum down. They were unsuccessful in destroying the building but did cause damage. The building was not redone; instead, the damaged and charred ceiling was left as a reminder that persecution and hatred is not entirely a thing of the past, but rather an attitude which still is with us today. One which everyone must be aware of and work to keep from coming to power yet again.

The visit was powerful and meaningful, and I am happy to share it here. I, however, did not take loads of photos. In fact, I took just one, which you’ll see at the top of this post. I felt it odd that people were taking so many photos, posing under the entry gate, snapping photos of the empty and ruined gassing chambers. Those are not photos I want in my photo album, they are memories I will keep with me but I do not think they need to be shared on any social media feeds. 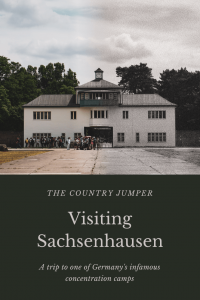 Your Guide to Visiting Brno, Czechia

Norway on a Budget

I remember having visited a concentration camp near Berlin more than 10 years ago but I am not sure about the name. Like you it was a beautiful sunny day and it felt so weird. The ambiance there was very special and I felt very emotional… I didn’t regret seeing it tho.

Definitely tough but definitely necessary to go to these places.

Reading your blog has definitely got me thinking about coming up with a plan to visit in Sachsenhausen the future at some point.

I am glad to hear that. It’s a tough place but worth the time to understand the history further.

Thank you so much for sharing your experience. I am not familiar with this particular concentration camp. It is so important that we remember. My husband’s grandfather survived 3.5 years at the Ebensee Concentration Camp in Austria. We had planned to honor him and visit on the 75th anniversary of its liberation in May. However, with the pandemic, that meaningful visit will be rescheduled.