Your Guide to Visiting Warsaw, Poland

Warsaw isn’t cute. It’s not pretty. It won’t try to sell you an image of a perfect European city because it’s so much more than that. It’s gritty, and tough, and rough around the edges. It’s got character and history and a story to tell. Warsaw is a place you won’t fall in love with but may never want to leave. You’ll want to plunge through the urban forests and bask on the untamed city beaches. You’ll want to dodge pedestrians on your own bike and drown out the highway drone as you sip a craft brew sitting in a handmade, wooden, egg shaped swing at a roadside bar.  I hope you don’t fall in love with Warsaw, it doesn’t seem the type that would be into romance, but I do hope you stick around, I think it’d like that.

How to get to Warsaw

From Krakow we took a 3 hour train. In mid-June I bought the tickets about a week before traveling and the seats were sold out. Though we still paid full price, 48 PLN ($12.89; €11.31) each. I didn’t think much of not having seats and thought we’d be able to hunt one down, maybe not together but no problem. I was wrong, the seats were 100% sold out and the aisles, along the sides of the compartments, were also entirely full. It’s not clear if there’s a cap on the number of people Poland will cram onto its trains. We sat as comfortably as we could with our bags and people smushed up next to us. Luckily it wasn’t too hot and the ride was only 3 hours long. But, if you plan to travel summer time in Poland get those tickets early!


Getting to Warsaw city center from the

What to Do in Warsaw 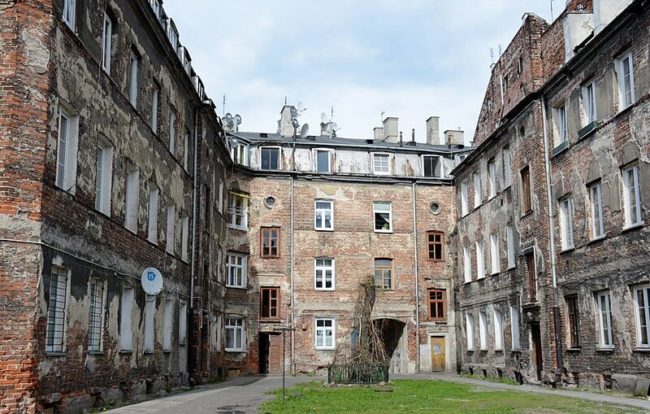 We went on our first freewalkingtour.com tour in Warsaw. Meeting at the Zygmunt’s Column in the Castle Square we took the 10:00 Alternative Warsaw, venturing into Praga, on the east bank of the Vistula river, known as the more dangerous area of Warsaw, previously the most dangerous area in all of Poland. However, Praga was also the only part of Warsaw not leveled during WWII, having already been under Russian command. That means it’s now home to some of the oldest buildings in the city as well as new artists, welfare type housing, revitalization, and poverty. The tour was led by a Warsaw local who’s family is actually originally from Praga. It was an interesting tour, equal parts history, art and modern day life. No sponsored recommendations and no forced break at an expensive café. As with all free tours around Europe, you are encouraged to tip the guide at the end and I was glad to do it. 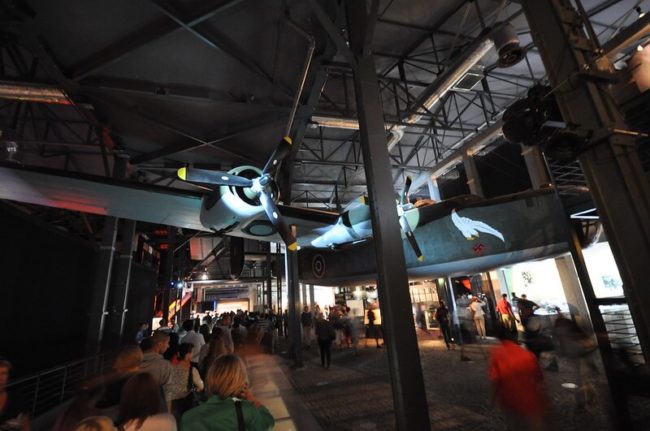 Closed on Tuesday’s, entry into the Warsaw Uprising Museum is 20 PLN ($5.38; €4.72) or 16 PLN ($4.31; €3.78) reduced. I’d heard good things about the museum but was very disappointed. Upon entering, the museum was immediately overwhelming in its amount of information and layout. It wasn’t clear what I should be looking at when. It seemed to want to go in chronological order, which would make sense but failed to really do it clearly. There were rooms focused on modern day Polish combat soldiers amidst the lead up to the uprising. I left possibly more confused than I’d walked in. I’d recommend checking Wikipedia instead.

We headed up the Old Town Observation Terrace to try to catch a glimpse of sunset over the city. The lady at the ticket desk was less than friendly and wouldn’t give my brother a student price despite him presenting his student card. This was more about principle than price in that they had an advertised student price but she wouldn’t let him have it. 6 PLN ($1.61; €1.42) general admission of course, gets you into the staircase of 150 stone steps which you must climb for a view. There are two large buildings directly blocking any magical sunset but it is still a nice bird’s eye view of old town square. 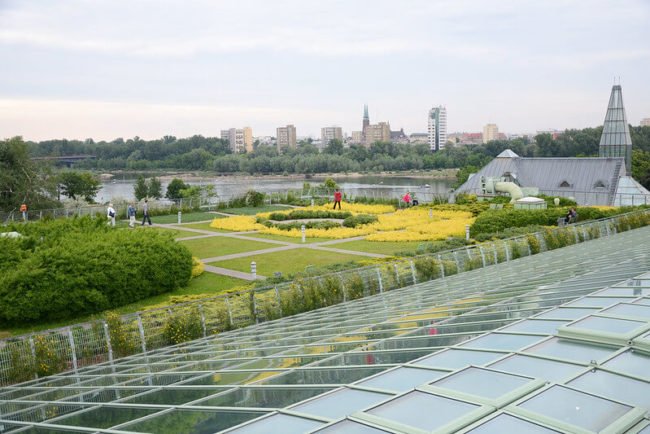 View from the Palace of Culture and Science Viewing Terrace

Stalin’s penis, unmistakably distinct in the Warsaw skyline can also be penetrated. 20 PLN ($5.38; €4.72) or 15 PLN ($4.04; €3.54) reduced gets you a ticket to the lift which brings you up 30 floors to the Palace of Culture and Science Viewing Terrace. Open air, the sides are covered with wire fencing to keep you in. A clear day can allow you to see straight across the city.

Park Ogrod Saski or the Saxon Garden, opened as one of the first in the world in 1727, is not far from old town. The gardens are shady and have nice dirt tracks for running. They are also home to a large, picturesque fountain, a musical Chopin bench (it actually plays music) and the tomb of the unknown soldier.

Where to Eat in Warsaw

An Israeli restaurant, Shipudei Berek is quiet on a Sunday night, we got a table no problem. The interior was clean, bright and spacious. The menu had a good few options from hummus and pita to kebabs and salads. We ordered a delicious lamb kebab which came with meze- 10 mini dishes of veggies, salads and spreads-as well as an Israeli vegetable salad, which turned out to be repetitive with all the meze. 64 PLN ($17.12; €15.08) all together was a filling and delicious meal for two and included a glass of wine and a beer.

My first milk bar (bar mleczny) experience was a success. Milk bars, first introduced to Poland in 1896, gained prominence during the depression of the 30’s. The idea of cafeteria style cheap food to feed the masses survived through both the Nazi and Soviet times. Todays milk bars are a great way to get a cheap, fast meal while still avoiding greasy fast food chains. At Bar Zabkowski you can grab a google translated English menu to help get some idea of what you’re ordering. I got a pork cutlet and what was called a salad bouquet. I paid 13 PLN ($3.47; €3.06) at the register and gave my receipt to the cafeteria workers. The service was a bit slower than expected but after a few minutes wait I was handed my tray. The food was simple but tasty, my ‘bouquet’ was a small plate of three different types of salads: coleslaw, red cabbage and something unknown. Across the river from old town, in Praga, Bar Zabkowski is definitely worth a visit.

We found Same Krafty online through a cross reference of the suggestions on many different sites. A microbrew pub and restaurant they claim to have 50 beers on tap at any one time. I went with a typical pilsner and my brother had the wheat beer. We both had burgers, his cheese, mine bbq. The burgers were big, juicy and delicious, if a bit well done. We also spotted a few pizzas floating past our table looking huge and tasty.  With prices at 20 PLN ($5.34; €4.71) a burger, around 25 PLN ($6.68; €5.89) for a medium (32 cm) pizza and between 7-9 PLN ($1.87-$2.40; €1.65-€2.12) for a medium beer you’ve got yourself a deal. This isn’t Polish dining but sometimes a delicious burger is all you need, don’t be afraid to admit it!

We saw a sign for bagels outside and got excited. They were already pre made into sandwiches and delivered that way, plus there were only two choices. We grabbed the last smoked salmon bagel and shared it, the other choice didn’t look so good. I also got a green smoothie which was spinach with mango and banana. The smoothie was big and delicious. The bagel was disappointing. Neither were cheap as we were only a few meters from being right in the middle of Old Town Square.

Dwoch Takich is a quiet breakfast spot down the street from old town square I had two fried eggs with chorizo, thinly sliced cold cut rather than a thick sausage type but still good. Another smoothie, some sort of berry combination. It was a good breakfast on a nice sunny terrace. There was also a cozy indoor space upstairs for a rainy day or, say, winter. 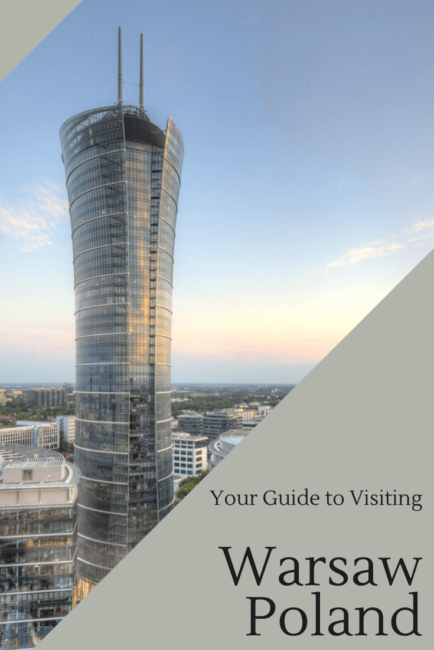