Your Guide to Visiting Wroclaw, Poland

1
FacebookTwitterPinterestLinkedinWhatsappEmail
Hey! I just wanted to let you know that as an associate of Amazon and other companies, some of the links in this post allow me to earn a commission on your qualifying purchases. This is at no extra cost to you!
---

Falling somewhere between Gdansk and Warsaw in size, Wroclaw’s main bits are walkable but the tram and bus systems run smoothly and get you to its outer reaches. It’s speckled with canals, green space, and gnomes. Terraced bars sit along a tree-shaded walking and biking path which runs along one of the main canals as well as throughout the city. Citi bikes are available and everyone’s cycling. Live music plays late into the light summer nights. Wroclaw’s still being kept on the down low so tourism isn’t what it is in nearby cities.

How to get to Wroclaw

We took a pretty long train ride from Gdansk, 6 hours in total. Luckily we had seat reservations for this one! The train was more or less sold out so it wasn’t the most comfortable ride. Unfortunately, Polish trains really haven’t caught up to the standards of say, Germany. The un-air-conditioned compartments squeeze 8 people, face to face, into stiff fabric covered seats. The legroom is nonexistent and the headrests stick out farther than the seat backs making for an awkward chicken like position. In the end, we got there, rather uncomfortably, for 56 PLN ($15.15; €13.27) each.

What to Do in Wroclaw 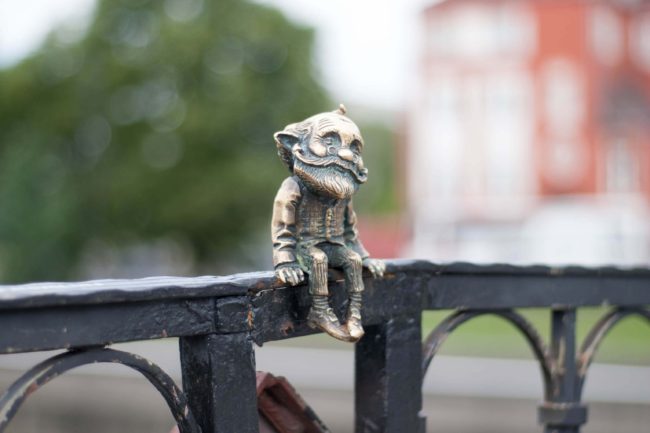 When was the last time you did that?! Wroclaw is spotted with little gnomes. They’re hanging out everywhere through old town and elsewhere, be careful you might trip over one! We picked up a 6 PLN ($1.61; €1.42) gnomemap from the tourist information center which gave us locations of some, but not all, of the little guys. Some are cute, some funny, some old, some young, some working, some sleeping but they all share a history. Gnomes were used as a part of peaceful protesting undertaken by the ‘Orange Alternative’ movement, an underground movement during communist times specifically aimed at the ridiculous censorship of public space. The first gnome statue, however, was not seen in Wroclaw until 2001 but quickly reproduced to about 400 small people through the city today.

A definite disappointment, touted as a flea market where you just might find some rare Nazi relics that was far from the reality. Tent after tent of sellers with exactly the same cheap Chinese shit. Even the veggies sellers weren’t inspiring. Don’t waste your time.

A food hall with the same name as that in Gdansk this one was less exciting in terms of its food offerings. No fish stall there were only one or two meat sellers. Plentiful flowers and a milk bar like restaurant in the corner keep in mind the hall is closed on Sundays.

The Wroclaw Fountain is located at Centennial Hall we took the number 4 or 10 tram to Hala Stulecia, from there head back behind the big round building, you really can’t miss it. The fountain is huge with about 300 nozzles shooting water into the air at different times and manners. We grabbed a beer from the little vendor in the square and sat on the edge with our feet in the water, same as every local was doing. The fountain is continually running but has a show which goes every hour from 10:00 until after dark (time varies depending on the month). We were in Wroclaw at the summer solstice so night was quite late and we didn’t stick around for it, but after dark the show includes an apparently quite spectacular light show (Fri, Sat, and Sun only). 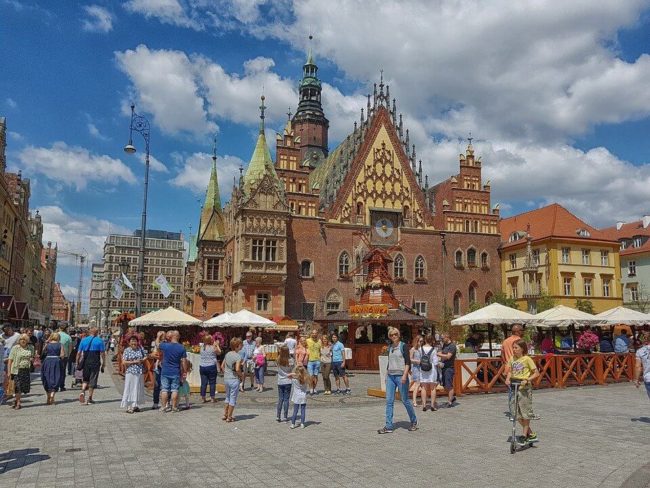 The main square in Wroclaw, you can’t miss it. At the heart of the old town, it’s a beautiful spot with perfectly painted buildings and the impressive and towering, Old City Hall. Summertime sees half of the square filled with vendors selling overpriced meats but also only slightly overpriced beers. Which can be enjoyed in the adult sized sandboxes simulating a city beach!

Where to Eat in Wroclaw

We were hungry and not ambitious about our choice so the colorful outdoor seating at Mango Mama beckoned us. We should have been more ambitious. The table we sat at hadn’t been clothed down, during the course of our meal four or five tables finished and left and remained uncleared. The service was very slow. We waited at least 25 minutes for anything to come to our table. Our waitress also specifically asked if we wanted our appetizers first, we said yes, and everything came together. The food was fine, we had a ramen soup and also ordered a butter chicken curry though I’m not convinced they didn’t bring us a masala instead. At that point, I just wanted to eat and wasn’t going to risk having anything returned and needing to wait another 25 minutes.

Wok In is an excellent spot for a cheap eat lunch. 29 PLN ($7.80; €6.84) gets you a good sized bowl of your choice of noodles with your choice of sauce, meat, veg, and topping. I really enjoyed mine though be careful, this may be the first place I’ve been in Eastern Europe where spicy actually does mean spicy.

Along the canal is the absolute gem, Bulka Z Mastem. A beautiful, instagrammable, back garden terrace filled with potted plants, vines, birdcage decorations and friendly wait staff. Ours had great English and had spent last year in Vermont! We were there 11ish on a Sunday and it was busy, we may have been just in time for a table, though there were plenty open inside the just as cute interior. I ordered a sweet bread breakfast covered with fruit, marmalade, mint, yogurt and sprinkled with flavored sugar. It was delicious and surprisingly filling. My brother ordered the American breakfast of eggs, sausage, toast, salad and spreads. We also shared a pitcher of the ‘rosy’ a fruity prosecco cocktail. We paid 73 PLN ($19.64; €17.23) for the meal. I would definitely recommend this spot!

Along the canal pathway I was so obsessed with we stopped and had a beer (8 PLN; $2.16; €1.89) and dinner at Klub muzyczny Stara Piwnica where we were surrounded by trees wrapped in twinkle lights while listening to a live band which was some kind of mix of Polish, Jewish and South American music. I ordered a spaghetti ragu, 20 PLN ($5.40; €4.73), and my brother a camembert burger, 28 PLN ($7.48; €6.63). My spaghetti was a large bowl of nicely cooked noodles with the ragu placed on top, not smothered throughout, which for me, as a sauce minimalist, was perfect! My brother’s burger was well done, juicy and substantial, the camembert on top was essentially a burger in and of itself, breaded and thick. Both dishes were filling and delicious. The service wasn’t quick but the place was crowded and it was difficult to get the attention of the waitresses with so many people just drinking and ordering from the bar. This place also has a basement interior which had a very different vibe with cowhide bar stools and dark décor, while the live band was playing outside there was another woman singing on the stage inside with a depressingly small audience.

On our final night in Poland, I realized that my brother hadn’t yet had Polish vodka shots, a staple. So, I searched a vodka
bar and we headed over to Pijalnia wodki I piwa. At about 7 PM on a Sunday
night, it was just us and the bartender. This spot is open 24/7 and I can imagine weekend evenings it’s very popular. The interior is cartoonish and reminiscent of a classic American diner. There are some snacks but our focus was on the shots. A menu of 14 mixed shots with everything from Tabasco to black currant juice as well as a plethora of straight classic and flavored vodka shots. Everything 4.30 PLN ($1.16; €1). We scrounged together our last coins and each had three shots. Each one was beautifully created in front of us and was more delicious than I’d imagined a vodka shot could ever be. 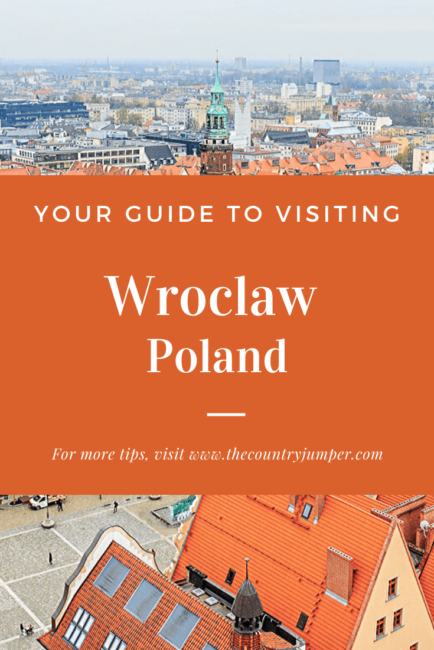 What to do in the West of Ireland

Plan Your Adventure in Slovakia

You know I never really thought about visiting Poland but many people have talked about how awesome it is. Like this post really makes me change my mind! Where else in Poland would you recommend beside Wroclaw?

So I went to Krakow, Warsaw, Wroclaw, and Gdansk. Honestly I would recommend all of them. Krakow perhaps being my favorite, than Warsaw and Wroclaw and Gdansk being at the bottom of the pile. There are plenty of other places too and I really recommend going now before it starts getting too crowded!!