The Donkeys of Mijas

It was an Instagram suggestion from a stranger with pretty pictures that brought me to the west end of the Costa Del Sol and the mountain pueblo of Mijas. I was expecting another cozy, cutesy pueblo blanco. I was expecting good views and overpriced food. I was expecting steep hills and narrow streets. I wasn’t expecting the donkeys.

The donkeys of Mijas. I was shocked when I saw them. At least 40 of them tied up, fully tacked; saddle, bridle, blanket, everything, some of them in the blazing hot sun, waiting for a tourist who wants a ride.

Let me stop here to say that I have ridden horses all my life. I find no problem with horses, donkeys or the like being ridden or worked, with respect. They deserve to be untacked, hosed down, given water, food and freedom as soon as they are done their work, which, in the summer ought to be first thing in the morning or last thing in the evening, out of the heat of the day.

I visited Mijas in early September when the true heat of mid-summer in Andalusia had started to wane. It was about 28°c, that’s an easy, breezy 82°f. How would you like to stand out, fully clothed, all day, under the sun, in that heat? And let me reiterate, that day was cool, the weeks before had seen highs up to 32°c, at least. That’s nearly 90°f.

I carried on with my explorations of Mijas but with a sour taste in my mouth as I watched tourists of all shapes, sizes, and colors be led around, single file, atop the donkeys, grins on their faces, flopping back and forth, only minutes away from a cold beer and relief from the harsh sun.

I did what many of us do when we are frustrated: I googled.

My google search of ‘the donkeys of Mijas’ quickly produced stories of the abuse that the donkeys are put through, the abuse that occurs in broad daylight, the abuse that tourists were able to record on their phones of a collapsed donkey being kicked in the head, repeatedly. And this is only what’s done out on the street.

I also learned that the donkey ‘taxis’ started in the 1960’s when a local farmer realized a potential business after passing tourists asked for rides on his farm donkey and left him with huge tips. (I have big problems with the tipping culture Americans have infected the world with – but that’s for another time) 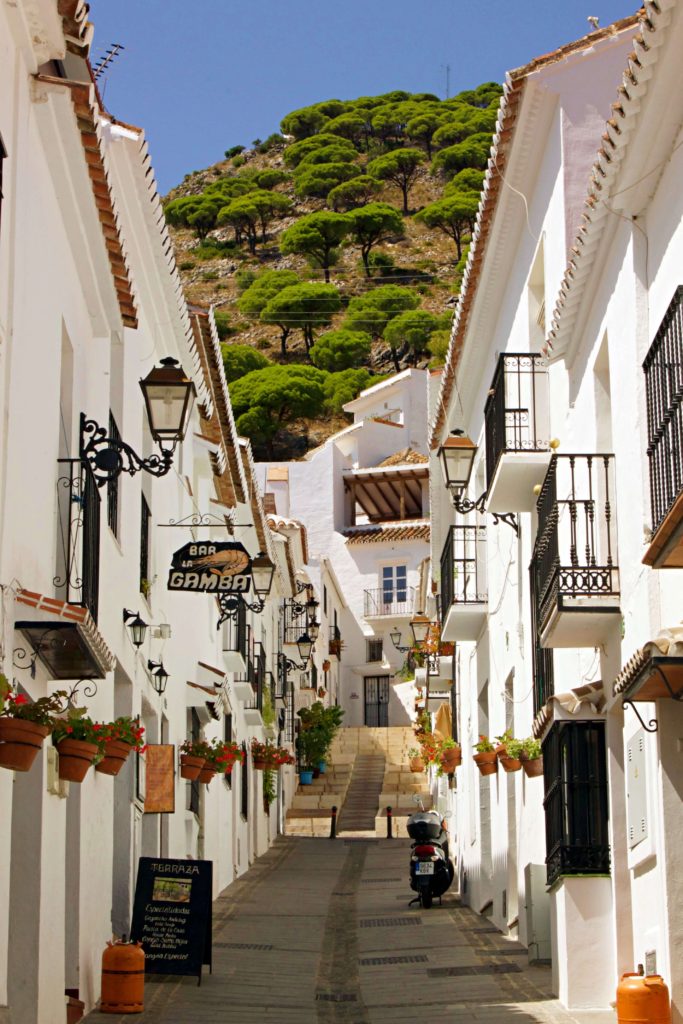 And finally, my search produced what I was most looking for, El Refugio del Burrito (The Donkey Refuge), an organization that works to better the lives of the Mijas donkeys (as well as others worldwide). I reached out and quickly received a response from Nicky Cohen, the Donkey Welfare Advisor of the Malaga chapter. We arranged a phone call.

She had a lot to say.

Heat is actually not her main concern at the moment. Luckily, neither is overwork. Perhaps a sign that tourists are starting to get a grip and business is slowly declining for the donkey owners. Of which there are 5 or 6, each with about 10 donkeys. She informed me that the current transport counsel is much more willing to work with her group than others have been in the past, and they have been making small steps in the right direction. The donkeys are generally not underweight, their hooves (feet) are getting better but still have room for improvement. Some relatively good news.

She had plenty of other concerns though.

One of the biggest concerns is the fact that all of the donkeys are stallions (uncastrated equines). This, in and of itself is not really a problem. The problem lies instead with the fact that a group of stallions cannot be loose together. As with most uncastrated male animals, they would fight. If you make your way to Mijas you’ll see the donkeys lined up, tied to bars with short ropes, this is how they live their entire lives. Their home ‘stables’ is a small open space, which do not meet regulations, where the donkeys continue to stand, tied up. They never, ever, are allowed to freely roam, never able to use their four legs to walk of their own free will. They walk when a tourist pays for a ride and they walk back and forth from home, those are their only opportunities for movement. 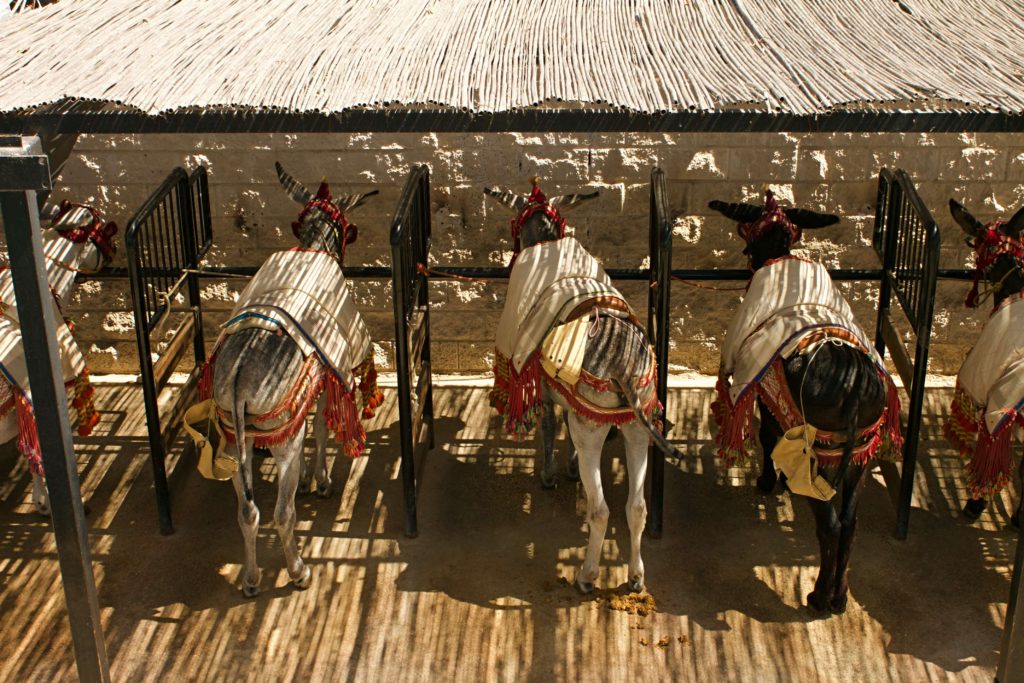 El Refugio del Burrito has offered to cover the cost of castrating the donkeys allowing them to be free together. The owners have refused. They claim that a castrated donkey is more skittish and difficult to handle. From personal experience, I know that the validity behind this claim is nil and in fact geldings (castrated equines) are much more docile than stallions. The true reason behind their unwillingness is more likely related to machismo and large cojones being of the utmost importance to men in southern Spain, even when talking about their donkeys.

Ms. Cohen stated that the refuge is still pushing for castrations, their aim at this point is to do one donkey per owner as a sort of trial for the owners to see how things go. Of course, in hopes of eventually having them all done.

The local town hall is meant to be monitoring, but they don’t. Local police won’t get involved because the donkey owners are their buddies, their drinking mates, their neighbors, their cousins, Mijas is a small town. The day before I spoke to Ms. Cohen she had been in a meeting with town hall and they stated they would begin sending an ‘inspector’ to check up on the day to day situation. The refuge has a course planned for the beginning of November this year to teach that inspector what it is they are looking for as he or she most likely won’t have any equine knowledge.

The refuge is working hard, they are advocating for the donkeys of Mijas. They’ve arranged an agreement that their vet can come at any time to check up on the donkeys. This year one of the owners relinquished two of his donkeys, no longer able to work, to their sanctuary. Things are slowly improving and the refuge is fighting for change.

So, what can you do?

Well, if you make it Mijas and you find your legs aren’t working so well sit down and take a rest, don’t even considering getting on a donkey. The town is easily walkable, and there are guided walking tours like these ones:
[the_ad id=”3376″]

If you see abuse to one of the donkeys, kicking, hitting or anything similar get as much documentation as you can. Each donkey should have a taxi number affixed to his bridle across his forehead. Record that. If you can get a photo of the abuser, do. If you can get a video of the abuse, even better. Take all the information you have and get it to the Mijas town hall:

And use your own damn feet. 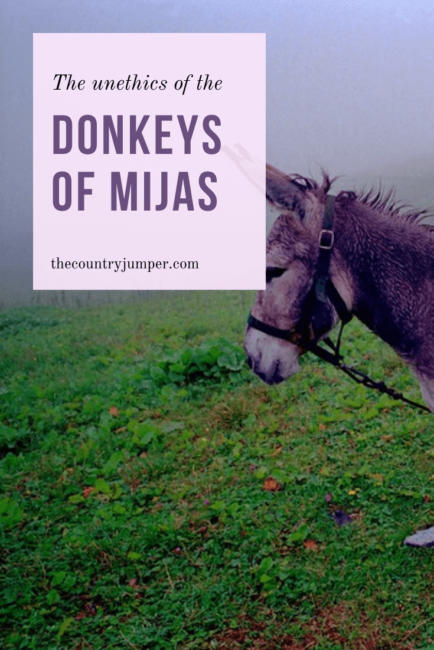